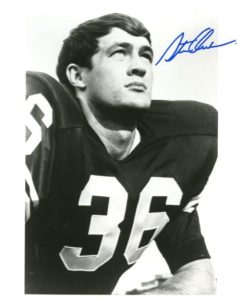 Growing up in small-town America Miami, Oklahoma in the 60’s was a rich experience that I wouldn’t trade for anything. It was wonderful living in a community where everyone knew who you were, where you could go anywhere you wanted as long as you were home for supper, and where civic pride was tangibly real.

The city’s pride swelled to the breaking point in 1969, the year hometown boy Steve Owens won the Heisman Trophy.

Owens was a kid that, of course, everyone in town knew. I never met the man myself, but his brother (named Bill, I believe) lived on my street, and Steve’s nephew Tony, who was my age, was a familiar face in the neighborhood gang. And my schoolteacher mom was quite proud of the fact that Steve was one of her students.

I’ve always stated that Miami was Steve’s home town, but I stand corrected. He was actually born in Gore, Oklahoma, and moved to Miami at an early age. While he was a young kid, OU was in the process of compiling an incredible 47 game winning streak. Any football-inclined youngster in Oklahoma dreamed of playing for the Sooners, and Steve was no exception.

In high school, Steve shined for the Wardogs. He averaged 7.2 yards per rush and gained over 4,000 yards in his four years. He caught recruiters’ attention, and happily signed for his favorite school.

But the coaches weren’t sure what to do with him. Owens was a bit of a paradox. He was a track star who was quite speedy, but he looked slow on the field. The Sooners considered making him a tight end. But in the end, they played him at running back his freshman season.

He didn’t play much, and didn’t dazzle when he did. But the next year, he ran for 813 yards and scored 12 touchdowns. He also scored a TD in OU’s Orange Bowl victory over Tennessee.

In his junior year, he gained 1,536 yards and started getting attention from the press. That year, O.J. Simpson blew away everyone else for the Heisman, but he called Owens and predicted he would win it the next year.

Owens shined in 1969. His team had problems, though, and lost four games. But Steve began putting together a string of 100-yard games the previous year that continued into his senior season. Once, during a shellacking of Colorado, Owens wanted to let up on the hapless Buffaloes. He was reported to have said “Let’s just fall on the ball and forget this 100-yard stuff. It’s not that important.” Offensive guard Bill Effstrom’s response to him was “It might not be important to you, but it’s sure important to us.”

Owens ran hard and picked up 112 yards. He ended up with 17 straight 100 yard games, a record that still stands.

When Owens won the Heisman that year, a small town became ecstatic. Unfortunately, I had moved away by then, so I missed out on the fun. But I was pleased to drive down Steve Owens Boulevard during a visit there a few years ago.

Nowadays, Owens is CEO at a big insurance agency in Oklahoma City. Life turned out well for the gentleman, I’m happy to say. So here’s to a small town boy who made good, and gave perennial bragging rights to everyone from Miami, Oklahoma.