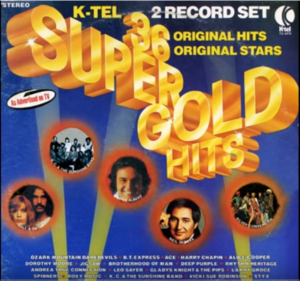 If you watched daytime television in the early 70’s, odds are you you heard commercials featuring snippets of songs fired at you in rapid order, with the added admonition “Not sold in stores!” You would then be presented with an address where you could mail a check for a very reasonable sum in order to receive a record album or eight-track tape in the mail.

Except for the anxious waiting, it was win-win.

K-tel hawked kitchen gadgets, Miracle Brushes, and records on television in the 60’s and 70’s. They became a familiar part of our living room ambiance, as we would step out to the kitchen or bathroom in the middle of a Roy Rogers movie to the voice of a fast-talking K-tel pitchman. The salesmen were frequently imitated by comedians. Who can forget Dan Aykroyd’s Bass-O-Matic blender on SNL?

Philip Kives, K-tel’s founder, was a Saskatchewan farmer before becoming a door-to-door appliance salesman. Not satisfied with trudging suburban sidewalks, Kives began presenting his vacuum cleaners and other home appliances in public areas such as fairs or the boardwalk in Atlantic City. In 1962 Philip and his brother Ted launched Syndicate Products Ltd. in the basement of his parents’ Winnipeg home. One of the company’s early endeavors was a five-minute television commercial for Teflon-coated cookware. The amazing sight of an egg not sticking to a pan (Teflon was brand new, remember) sold a whole slew of frying pans.

K-tel made TV commercials that ran longer than the standard sixty seconds and aired them at off-peak hours, a practice which has evolved into today’s 2:00 AM infomercials. Of course, you’ll recall that they ran thousands of traditional ads, too. 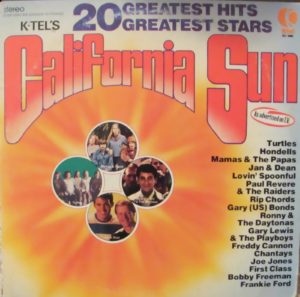 In 1965, Kives bought the rights to a few country music tunes and released the paradoxically titled 25 Country Hits with Groovy Greats. The man had a Midas touch. The weirdly-named album sold 180,000 copies in Canada.

He turned his eyes southward and in 1971 released his first US-marketed compilation: 25 Polka Classics. It sold a cool million copies.

Like their sales pitches, the albums started coming out fast after that. Compilations were released every couple of weeks for a while covering every conceivable genre, including the under-appreciated World’s Worst Music category. Polkas, classic rock (before the term even existed), country/western, blues, Perry Como (whatever you call his style of music), it was all covered.

K-tel managed to license a whole lot of music at a very reasonable rate. They passed the savings on to consumers. The result was that you could get real songs by original artists at a fraction of the cost of buying albums from the mainstream record companies.

Nowadays, the idiots who run the RIAA are doing all they can to ensure that you will continue to buy CD’s at fifteen bucks apiece. If K-tel was to start up today, no doubt they would be met with firm refusals to license songs more cheaply. Instead of K-tel, savvy consumers are bypassing CD’s in stores and buying music online, in many cases bypassing the RIAA altogether. Odds are the cigar-smoking clueless clods will go out of business before giving the public what they want: affordable music, just like K-tel gave us so many years ago.