The southern California soil shook violently the morning of February 9, 1971. That’s because a fault with the provocative name of the Santa Susana thrust exhibited a lot of movement that day, with the result being an earthquake measured at 6.6 at its epicenter. While not a big quake by Richter scale standards, it affected one of the most densely populated areas of the world, with widespread destruction being the result.

The 71 earthquake made the Huntley-Brinkley report that evening. That’s how I learned about it.

Earthquakes were difficult to comprehend in northwest Arkansas, my home at the time. We dealt with nature’s cranky side, to be sure, but in the forms of hail, tornados, lightning, and drought. Earthquakes were other-worldly phenomena.

But I had a connection to the 71 quake, even though I didn’t realize it until some 12 years later. For waking up that morning on the floor, completely oblivious to how she got there (she is STILL a very sound sleeper), was my six-year-old future wife of twenty-four years so far. 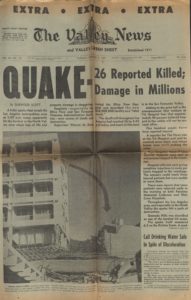 She awoke (much after the fact) in a stricken scene with toys, lamps, pictures, and other detritus from a little girl’s bedroom strewn all around her. That quake was ALMOST powerful enough to wake her up ;-).

But the rest of us were shocked and entranced by the images we saw on the news of the collapsed buildings and freeway overpasses, the fires, and the helpless look of victims whose homes were severely damaged.

The quake, as every other one located in California, elicited speculations from the general public as to when the whole state would collapse into the Pacific, as it seemed destined to do.

I worked as an electrician for a couple of years in the San Gabriel Valley area (where I met my future bride), and was impressed that the construction trade had learned many lessons from the 71 quake. Precautions were taken that greatly strengthened buildings against future tremors.

Where we currently reside, we are in a position to feel tremendous shockwaves should the New Madrid fault, which runs parallel to the Mississippi River, ever decide to elicit plate movement. But the lessons learned from the great 1971 San Fernando earthquake remained strictly a local education.

If that fault ever duplicates its great 1811 quake (which caused the great river to flow backwards), look for the possible deaths of millions.