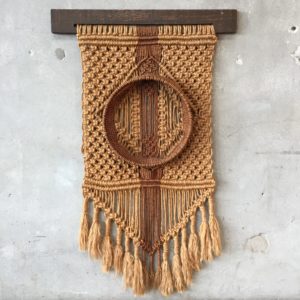 Back in the 1200’s, Arabian weavers began tying decorative knots into the threads of excess fringes on hand-loomed fabrics. 500 years later, about the same time that polyester, men’s hair spray, and and fondue pots were all the rage, it caught on big time.

Macrame was one of the fads that defined the 70’s. Interestingly, the decade known for excesses shared the macrame craze with the much more restrained Victorian era. In fact, macrame was probably bigger then than when we were wearing Spiro Agnew watches. Hmm, I wonder what a tightly corseted Victorian lady would have thought of boogieing at Studio 54?

During the 70’s, articles made of myriad tiny knots of rough fabric were seen everywhere: hanging from ceilings, being carried by fashionable ladies, being worn by many more, and even in front of our entrances to our homes.

Long before it became cool to use hemp for fabrics, macrame utilized it. Of course, it also utilized pink and lime green man-made fabrics. But classic macrame creations that I remember used undyed natural hemp and jute fibers.

I can recall macrame plant hangers that would stretch out for six feet or longer. They would hang from the ceiling and hold three or more pots, with possibly a fourth hanging from the bottom.

I also remember macrame purses, dresses, and even shoes being sported by females of the decade.

Yes, I remember chairs that hung from the ceiling made of the ubiquitous knotted strands.

I remember sitting in them. And no, they weren’t the least bit comfortable, but they were pretty cool at the time.

But the most plentiful macrame creation of the 1970’s was, without a doubt, Bubo virginianus. That would be the great horned owl, to you non-ornithologists.

Owls made of macrame hung from walls all over the nation. And handicrafters found them easy to make, so they multiplied like coat hangers. And they were given as gifts, hence my decidedly non-70’s mother ended up with two or three of them hanging in the farmhouse we lived in, right next to the massive Grant Wood print.

Macrame is still around, of course, like many 70’s popularities, just not in the same quantity. In fact, I spotted a macrame doormat this week. But once upon a time that we Boomers remember well, the knotted strands were the ultimate in coolness and fashion.