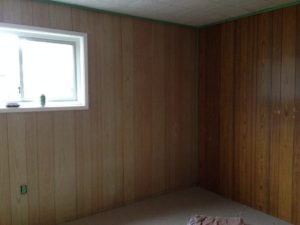 Along with shag carpets, many homes of the 60’s and 70’s featured 1/8″ thick 4’x8′ wide sheets of laminated wood nailed to the wall. This was the paneling that we grew up with.

Paneling can be found today in forms like nice wainscoting, thick solid wood wall covering that can rise twelve feet or more, and 3/4″ thick sheets with two to four inch wide segments of polished hardwoods. But step back to a middle-class home circa 1970, and the walls are covered with the above-mentioned processed product composed of the thinnest shaved slices of grained wood you could imagine. And this was frequently the ONLY wall covering, with nothing but bare wood studs underneath.

But it was found in practically every home in the 60’s that was either (a) new, or (b) recently remodeled.

Wood paneling had a lot going for it. It was cheap, it was forgiving of things like crooked walls, it was simple to install (you could buy nails that matched the wood color, so they would disappear), and it looked a lot better than cracked plaster board, which was often found in older homes whose foundations had settled with time.

Of course, it was also ugly, or so we perceive it today. But we didn’t feel that way circa 1969.

I remember our modest Miami, Oklahoma tract home having its walls covered with paneling that was the color of maple. But it wasn’t the house’s original wall covering. The house was probably built about 1950. I have very distant memories of dad nailing the paneling up over whatever wall surface we had prior to that. We became a paneling-covered-wall family about 1966.

Years later, I became an apprentice electrician upon high school graduation in 1977. The tract homes I helped wire would have DARK 1/4″ paneling installed in the living room, and we installed dark brown switches, receptacles and plates in the electrical boxes that were located in its expanse.

No wonder so many suicides took place in the disco era.

As I mentioned before, wood-lined walls remain intensely popular today. However, our old 1/8″ thick paneling seems to have become a relic. Unlike things like Palisades Park, nickel candy bars, and Shasta sodas, we don’t really miss it.