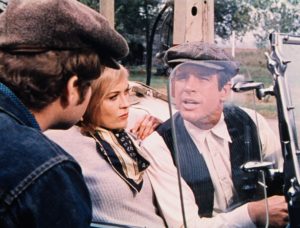 This was one of those movies of the 60’s that gave us the ratings system.

If I recall correctly, this movie came out with a “M” rating. That meant recommended for mature audiences. That didn’t stop a seven-year-old from getting into the Coleman Theater in Miami, Oklahoma with his older brother.

The movie featured some of the most violent scenes ever seen on the screen to that point. The slow motion machine gun scene at the end still gives me the shivers.

But it was also a pretty darned good movie, as can be evidenced by its imdb.com rating of 8.0.

And we loved repeating its lines and re-enacting its scenes in the school playground at recess. “Dirt in the fuel line. Just blew it away . . .”

If you were a kid in the 60’s who got in to see Bonnie and Clyde, I’ll bet you still remember it vividly.