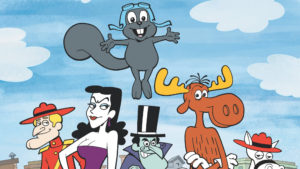 “Hey, Rocky, watch me pull a rabbit outa my hat!”

It takes genius to create a cartoon show with humor on two completely separate levels. As a five-year-old kid, I was a huge fan of “moose and squirrel.” Then, when my own kids were about the same age, I watched a video of the old shows. I couldn’t believe the humor that was way over a kid’s head!

Just think for a minute how preposterous this show’s premise was: you have a flying squirrel and a dim-witted moose who are pursued by a couple of Pottslyvanians (who sounded like they were from Moscow). I never really learned what Boris and Natasha had against them. But Mr. Big and Fearless Leader insisted that they be eliminated. In between the show-long adventure, you would get snippets of wisdom from Aesop, Fractured Fairy Tales, Dudley-Do-Right, Mr. Know-It-All, and my favorites, Sherman and Mr. Peabody.

Sherman was the boy who was, er, not the sharpest crayon in the box. Fortunately, his dog was smart enough for the two of them. A dumb kid and a smart dog who traveled through time. Is that brilliant, or what?

The animation was absolutely horrible. Sometimes Boris’s mustache would disappear and reappear in the same episode. But that only added to the show’s appeal.

The show appeared in 1959, and there was a lot of Cold War humor for the grownups. Those were tense times, laughing at bumbling Russians must have helped.

It’s amazing how the show keeps showing up in modern-day culture. Who doesn’t have a character in their workplace known derisively as Mr. Know-It-All? And remember Back to the Future? The first person Marty McFly runs into in the past was Mr. Peabody! And the fact that so many of Matt Groening’s characters on The Simpsons and Futurama have J. as their middle initial is no coincidence. It’s Groening’s way of paying tribute to Jay Ward, the show’s creator.

One last bit of trivia: that familiar narrator’s voice was none other than William Conrad, Cannon himself!

Check out this site for more on Rocky and Bullwinkle.