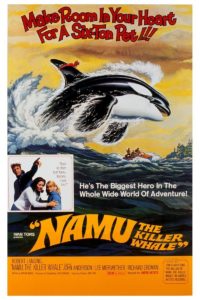 The name is familiar, if you watched TV in the 60’s. But you probably don’t know a whole lot more about Ivan Tors than the fact that he was the producer of shows that we Boomer kids loved like Flipper, Gentle Ben, and Daktari.

Ivan Tors was born in Hungary in 1916. He was a successful playwright in his native country, but decided to move to the US in the 1930’s.

Tors was fascinated with science fiction, particularly undersea stories, and he yearned to write in that particular genre. Thus, he created A-Men Films with actor Richard Carlson, and cranked out a few 1950’s scf-fi classics, including Gog and The Magnetic Monster. He also penned the stories for 23 episodes of Science Fiction Theater on TV.

But it was in the decade of the 60’s that Tors’ star would burn its brightest.

Tors had his first big hit as producer with Sea Hunt, which debuted in 1958. 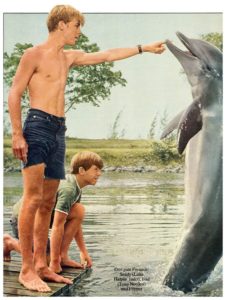 Ironically, the lone episode of the show that is burned into my mind indelibly involved a diver who was eaten by a killer whale. The paradox of that will be apparent in a moment.

Daktari was a very African show. From its opening theme, loaded with African instruments, to its occasional on-location shots from the Dark Continent itself, it was Tors’ homage to the preservation of endangered wildlife over there. He believed strongly in the values that the show extolled. Daktari was inspired by real-life Dr. A.M. Harthoorn. He was a friend of Tors, and ran an animal orphanage in Nairobi, Kenya. Harthoorn assisted in inventing the tranquilizer gun, which allowed for the safe capture of wildlife.

I know I watched a few episodes of Daktari, because that theme has been stuck in my head since LBJ was President. In its final year, the show featured a cute kid named Erin Moran, who would achieve fame a few years later on Happy Days.

Another theme song burned permanently into brain ROM was that from the movie Namu, the Killer Whale. Prior to this movie’s 1966 release, killer whales were possibly more feared than sharks in the public’s opinion. They were called “killers,” for heaven’s sake. The bold black and white coloration seemed to scream “danger!” Even the US Navy classified them as serious threats to divers(a description that wasn’t removed from official manuals until 1973).

The real-life Namu was accidentally captured in a gill net by a couple of British Columbia fishermen in 1965. He was sold to the highest bidder, Seattle Public Aquarium owner Ted Griffin. Griffin exhibited Namu at the aquarium, and also worked with Tors to produce a movie featuring the whale.

The film did well, and was shown on TV later. It instantly changed the public’s view of killer whales to just bigger versions of Flipper. Unfortunately, it also created a mad rush to trap orcas for sale to other aquaria.

Tors went on to produce more TV series and movies. He died on June 4, 1983, leaving behind a legacy of vision that thrilled many of us Boomer kids while we watched his shows and became fans of the ocean, animal conservation, and even African music.