His name was Iron Eyes Cody. He appeared in over 200 films, alongside Roy Rogers, Richard Harris, and Clint Eastwood, among others. But perhaps his most familiar role is that of an Indian who is appalled by how polluted his nation has become, and who is seen shedding a single, but powerful, tear.

The commercial turned Baby Boomer kids into ecologists. We were deeply moved by Cody’s performance. But we didn’t know the half of his acting abilities.

The commercial has been rated as one of the greatest ever, by the folks who keep track of such things. Its message is clear as a bell, as Cody’s Indian paddles his canoe through a river with floating trash visible while factories in the background belch forth plumes of smoke. Then, pulling his canoe ashore, he walks over to a highway, where a passing motorist flings a bag of trash that explodes at his feet. Finally, as the camera pans up to his face, we see the tear.

The whole time, bold music is playing as might be heard in one of Clint Eastwood’s Sergio Leone westerns.

It made quite an impression on us. 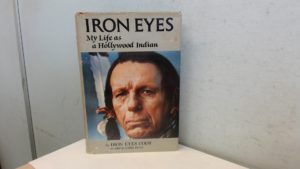 A few years after the commercial’s 1970 release, we heard, as Paul Harvey would put it, the REST of the story.

Iron Eyes Cody, who had long claimed to be parts Cherokee and Cree, was actually born Espera DeCorti in the small town of Kaplan, Louisiana. His parents were Sicilian immigrants.

As a young adult, he moved to Hollywood, where he changed his name to Cody. At some point after that, he also lost the Italian first name and became known as Iron Eyes.

He took the art of acting to its ultimate point: he became an American Indian. He adopted native American causes, spoke out loudly about their plight, and was always seen in his beaded moccasins, buckskin jacket and braided wig.

He married a native American and adopted two children, also Indians. When rumors of his true ancestry surfaced, he vehemently denied them.

But the proof is in the paperwork. Iron Eyes Cody did, indeed, masquerade as an American Indian. But he was not castigated by his adopted race. The community recognized that he made a choice to become one of them, and support their causes in the process. They accepted him as one of their own.

Cody also spearheaded the Keep America Beautiful campaign, and today, that polluted river he paddled on 37 years ago is much cleaner now, as is the rest of the nation. And a great deal of the reason is that single tear glistening on Iron Eyes Cody’s face.