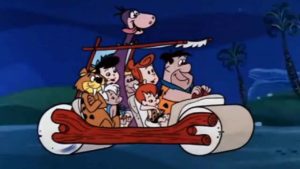 So, how does one tastefully cash in on a show that was canceled after only 39 episodes, but which had proven immensely popular after its demise?

That was the quandary faced by execs of the perennially-third-ranked ABC network in 1960. The Honeymooners was dropped by CBS after slipping from #2 to a still-respectable #19 in the Nielsens. But the now-more-popular-than-ever series lived on in regular sketches on Jackie Gleason’s variety show.

ABC smelled gold, but how to cash in without being too obvious?

The answer lie in a groundbreaking series: The Flintstones. The half-hour show, first aired in 1960, would be the first cartoon aimed at an adult audience. It would also be the first animated series to carry a single plotline for the entire episode. And it would also prove to be the hit series that ABC was looking for.

Most people didn’t even realize they were watching a show that was pretty much based on The Honeymooners. ABC managed to accomplish the perfect cash-in.

And, as could be expected, the cartoon series was as big a hit with the kids as it was for its intended adult audience. ABC probably foresaw that, as it had begun airing The Rocky and Bullwinkle Show, another hit with all ages, the year before.

Fred Flintstone was a blue-collar of prehistoric times. He was into bowling, hanging out at the lodge, and having a smoke (more on that in just a bit). Mechanization involved animals. Brontosauri performed as cranes to lift heavy objects. Miniature wooly mammoths vacuumed up dirt from the floor. And noisy birds honked like horns if you gave their tails a yank. 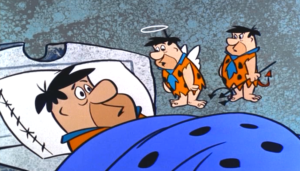 The voice of Fred was provided by Alan Reed. Reed was a veteran voice-actor, and also had character roles on many sitcoms of the 60’s. Wilma and Pebbles were voiced by Jean Vander Pyl, who also provided the voice of Rosie the Robot for The Jetsons. She, too, was a character actor in many sitcoms of the era. Barney was played by the great Mel Blanc, who also handled Dino’s jabbering. And Betty was performed by Bea Benaderet, who also voiced Tweety Bird’s owner for Warner Brothers’ Looney Tunes. Of course, in real life she was familiar as the star of Petticoat Junction. And let’s not forget her role as Jethro’s mother on The Beverly Hillbillies. Back to the subject of the column, Harvey Korman had a semi-regular role as the voice of space alien The Great Gazoo.

Part of the appeal of The Flintstones was that the stories, like those of The Honeymooners, were ones the average working stiff could relate to. Getting the boss off of your back. Winning the bowling tournament. Taking a chance on risky business ventures. That could be anyone, not just a stone-age dweller who propels his car with his feet. 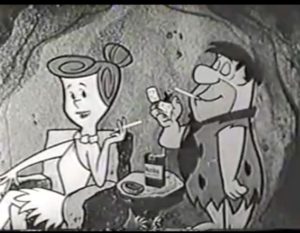 Celebrities were regular visitors. Anne-Margrock, Cary Granite, Stony Curtis, and many others would pop into the scene from time to time, voiced by their obvious real-life counterparts.

One of the show’s early sponsors was Winston cigarettes, and Fred and Barney were actually featured in a sixty-second spot that received lots of airplay early in the 60’s. It can be seen here, as well as a short ad which appeared at the show’s signoff.

The cigarette sponsorship was dropped in 1963 due to another groundbreaking moment in the show: Wilma’s pregnancy with Pebbles. Still another cutting edge plotline that was explored was Barney and Betty’s inability to conceive, resulting in the eventual adoption of Bamm-Bamm.

The theme song, which was recognized in the great John Hughes film Planes, Trains, and Automobiles as being recognizable by practically every person in the world, didn’t actually appear until season 3. The tune was composed by Hoyt Curtin, and the lyrics were written by Hanna and Barbera, who produced the show. Other hit tunes were frequently performed on the show by the original artists, although the voice actors themselves were also known to belt one out from time to time.

The show’s episodes were rebroadcast in several series afterwards, and the original series has now found a permanent home on cartoon cable networks. A live-action movie was released to middling reviews in 1994, and a live-action show was held at Universal Studios for a few years after the movie’s release.

Like many of us, the show just keeps going and going.