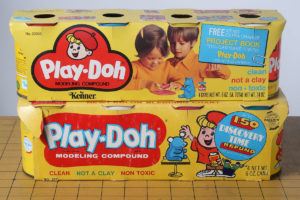 In 1956, Noah McVicker and his nephew Joseph invented a substance for cleaning wallpaper. The substance did a fairly good job, but the two soon recognized its potential as a child’s toy.

Department stores took an interest, so they soon started selling smaller containers. Sales were brisk, and a patent was applied for. It took nine years before it was granted, though, governmental red tape being what it is.

The gooey stuff was a huge hit. Rainbow Crafts sold millions of little containers of Play-Doh before selling out to General Mills in 1965. The McVickers were content, retired millionaires.

Play-Doh continued to be turned out by the millions of pounds. Accessories were added like the press that would create long strands in the shapes of stars, tubes, strings like spaghetti, triangles, etc. I never had that press, but I did spend endless hours making stuff.

The scent of brand new Play-Doh was heavenly. We probably would have played with it if it was unscented, but that aroma made it especially compelling. It was also non-toxic, which meant that, like crayons, it would frequently end up in young kids’ digestive systems.

Play-Doh would theoretically last forever, but in reality, you had to buy new cans every few months. It would quickly get loaded up with dirt, hair, and anything else that might be lying on your floor or table. Additionally, the different colors would eventually combine into a strange purple shade. What started off as distinct red, yellow, blue, and green all ended up the same purple. Weird.

My favorite creation was the snake. You’d take a wad of Play-Doh, stopping to give it a sniff, of course, and simply roll it on a flat surface until it was snake-shaped. You could then add different colored eyes and a forked tongue. Voila!

The great thing about Play-Doh was that what you did with it was limited only by your imagination. You opened up the containers and you made things! Many a creative imagination was trained at an early age by Play-Doh. True, not many of us are sculptors today, but who’s to say that we’re not better writers, designers, programmers, bricklayers, or whatever because Play-Doh stretched our creative muscles?

The company history is a convoluted one, consisting of mergers, buyouts, and the like. But now Play-Doh is in the hands of Hasbro.

I have great memories of Play-Doh from my childhood, and even better ones of playing with it with my small children a few years back. God willing, I’ll be on the floor someday with grandkids, making snakes and savoring that heavenly aroma.