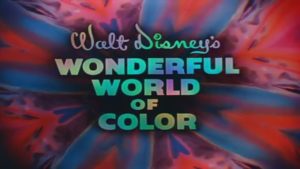 Sunday nights were the must-see-TV of the 60’s. Mutual of Omaha’s Wild Kingdom, Sullivan, Bonanza, and of course, Disney were its residents.

The Disney show started out as Disneyland on ABC in 1954. It was a hit, its biggest coup of that decade being the Davey Crockett series over three nights. Coonskin caps were the immediate rage in the wake of the hugely successful presentation.

In 1961, Disney hopped networks. It had nothing to do with ratings or cancellation. Instead, it jumped to NBC because the network was widely telecast in color. The show was rechristened Walt Disney’s Wonderful World of Color.

I count myself as fortunate to remember Walt Disney himself introducing the night’s episodes in a folksy, downhome manner. No wonder kids loved him. I felt like he was my grandpa.

Walt died in 1966, and the intro scenes were dropped. Good move. Nobody could hold a candle to the man himself.

The show opened to a musical accompaniment that I can still recall, in large part. And it looked so good on our brand new color TV.

The show featured movies (cut into one-hour chunks), nature-based-films, and various shorts in the Disney vault. The ultimate was when they would show cartoons. Man, I would get into a state of ecstasy when Sunday afternoon commercials would announce a toon on Disney that night. They would also announce next week’s show at the end of the episode, so sometimes the anticipation would last an entire week.

Dad would always act like we would have to switch the channel in such a case, but he never did. I think the old Norwegian had a sense of humor buried deep in his psyche.

Sunday nights no longer hold the same mystique over me, or the rest of the world. In fact, the various cable channels continue to make inroads on the Big Three networks (actually four, including Fox) so that the very concept of who’s number one is different now than it used to be.

But in the 60’s, Sunday night was the biggest show on television. And Walt Disney ruled it.