Oh, what horrible, neglectful parents we had by today’s standards. First of all, they smoked! In the house! Second, they would let us head out the door in the morning, and not give a second thought to us until we wandered in at suppertime! And, horrors of horrors, they let us ride in the back of pickup trucks!

Oh, the PC police would have them arrested and flogged nowadays. But nobody gave a second thought to any of that stuff in the 50’s, 60’s, and 70’s. Life was an experience that required a bit of common sense. On thew other hand, lawyers have turned present-day life into an experience of needing, indeed DEMANDING protection from one’s own stupidity.

When I was eight years old, my father obtained a blue-green 1966 Chevy pickup. We had just moved to a farm in rural Missouri, and a pickup was a necessity. I rode in the bed of that truck for countless miles. I would sit against the cab of the truck (dad insisted on that, we’re back to common sense) and savor the wind blowing through my summer-bleached-blonde hair. Riding in the back of that truck was a lot of fun.

Dad bought a stock rack for that pickup as well. That allowed the hauling of one or two cows. When the rack was on, the sitting-against-the-cab restriction was lifted. I could climb the rack and face into the 60 MPH wind. That was cool, too.

I loved that old truck. In 1973, when I was thirteen, dad let me drive it in the pasture. I was able to master a three-speed-in-the-column transmission at a very early age. 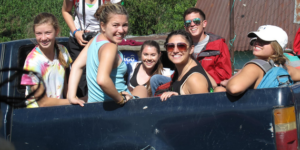 In 1978, Subaru introduced the Brat, a small pickup with actual seats installed in the bed. The seats were gone after 1985, and riding in the bed began to be viewed as taboo.

In local communities, tales were shared about drunks who fell out and were instantly killed. Soon, laws were passed that made criminals out of fathers who did exactly what MY dad did,

Nowadays, we get ticketed if we don’t have our seat belts on. Ironically, if you rode a motorcycle in Arkansas during the 70’s, a helmet was required. IMHO, that’s common sense. If you take a tumble on a bike, road rash hurts for weeks, but brain damage is permanent.

But nowadays, Arkansas bikers have fought for and earned the right to ride helmet-free. But if you get caught driving with passengers back of a pickup, you’d better get ready to cough up the price of a steep fine.