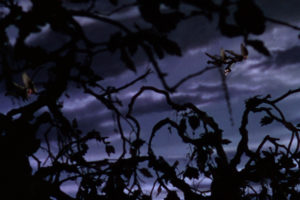 Every year, this movie was shown on network television. It was a tradition in my home to watch it, one I look back on with a variety of emotions.

The primary feeling was TERROR! This movie scared the living daylights out of me. From the tornado scene (I lived in a town that was regularly nailed by twisters, I was scared to death of them) to the creepy trees with faces to the cackling witch to the ultimate terror: FLYING MONKEYS!

I don’t know what it was about those airborne apes that was so terrifying, but I had numerous nightmares about them. The depicted scene, where they are flying across that ominously darkening sky, was the one that frequently sent me running from the room to hide under my covers.

Of course, the Wizard of Oz being the truly great film that it was, it also compelled me to watch it and get frightened again year after year as it was broadcast annually, first on CBS, then on NBC from 1968 to 1975, then back to CBS again.

At presstime, the film is still shown annually on TNT, TCM, and TBS. But it no longer captures the public’s attention like it did in the 60’s, when we would talk about its next showing in school for weeks before the annual event, in the dead of winter.

Other movies were shown every year on network TV. Look for them in future columns. Today, the annual airing of a film that gets the most attention is Frank Capra’s It’s a Wonderful Life, which, ironically, didn’t get much attention until the early 1990’s. Once again, it’s shown on a cable channel instead of a network that would allow you to see it via an antenna.

But in the 1960’s, the three Big Boys in broadcasting were NBC, ABC, and CBS. And whoever held the rights to the Wizard of Oz was guaranteed a very nice majority share on the night it was aired.

Geez, I still have nightmares about those blasted monkeys . . .