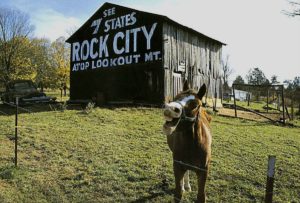 In the summer of 1967, we traveled to Montreal to see Expo 67. On the way back, I got to see some pretty amazing stuff, including Niagara Falls, the Great Smokeys, and about a million painted barns and roadside signs imploring me to See Rock City.

Well, guess what. It worked. My father was relentlessly hammered by me to take us to Rock City. He continued to be pelted with requests until he finally relented, and our big Plymouth was aimed at Chattanooga, TN.

As we drew closer to the eastern Tennessee burg, the signs got more numerous. By the time we arrived at Lookout Mountain, I was ravenously ready to See Rock City!

As hungry as I was to check it out, I really don’t recall too much of the actual experience. I remember standing at a high point where I could See Seven States, and a big balanced rock. That’s about it, really. But I remember that it was a very, very fun day, and even my staid parents seemed to enjoy it. 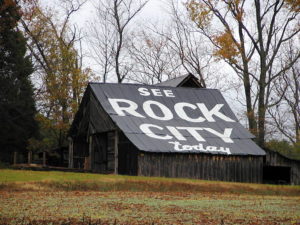 Rock City was founded by a man named Garnet Carter. The area atop Lookout Mountain had long been known to locals as “Rock City” because of unusual rock formations that formed “streets.” Evidently, Native Americans had long earlier enhanced natural formations to create them. Carter obtained the land, then began making plans to build a residential neighborhood called Fairyland, as well as a golf course.

The golf course was a bit too ambitious, so Carter instead built the world’s first miniature golf course.

His plans for Fairyland, which would be modeled after Imaginary European cities, also proved impractical. In the meantime, he and his wife had built winding paths around the massive rock formations and also planted wildflower gardens.

They had sunk a lot of money into Rock City. Now what?

Carter realized that the public would pay a modest fee to experience the immaculate botanical garden that he and his wife had created. So in 1932, in the height of the Depression, Frieda’s Rock City Gardens opened to the public. 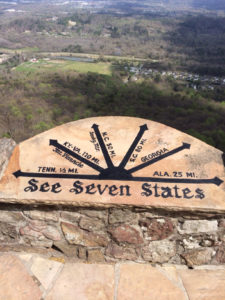 Carter knew that it would take advertising to get the public to show up. But times were hard. He really didn’t want to shell out bucks to newspapers that would be read today, forgotten tomorrow.

So he enlisted the help of a sign painter named Clark Byers. He hired Byers to travel the nation’s highways and offer to paint farmers’ barns in exchange for letting them paint three simple words: See Rock City.

Many a farmer took Byers up on his offer, and the painter would make certain that whatever side of the barn was best exposed to the (always) nearby highway would be brightly and boldly emblazoned with the words “Rock City” and as much of a sales pitch as he could finagle from the farmer. As the painted barns multiplied, so did the crowds. By by 1940, Rock City barns were spotted as far away as Michigan and Texas. And the crowds kept coming.

Rock City was known as a honeymooner’s retreat. It was also a great place to take the kids. National media writeups added to the success. Carter and Frieda’s dream of a European-styled neighborhood never came true (and the world’s first miniature golf course didn’t last too long either, although the Tom Thumb Golf chain that it became certainly has), but untold numbers of kids across all generations, including Boomers, have fond memories of making the long climb to the top of Lookout Mountain and checking out what Rock City has to offer.

The numbers of the painted barns have dwindled, but Rock City continues to thrive today, still owned by the Carter family. It’s nice when some things DON’T change.