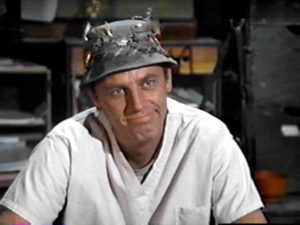 We just passed the 33rd anniversary of one of the most stunning moments in network TV. If you saw the episode that night, or even in a rerun, no doubt you are re-experiencing the shock you felt when Radar walked unmasked into the O.R. at the end of episode 72 and announced that Henry’s plane had been shot down over the China Sea with no survivors.

MASH had debuted three years earlier and was an instant hit. It was one of those rare mixes of great actors, great characters, great writers, and a great time slot. CBS soon owned Monday nights thanks to this perennial performer.

By 1975, McClean Stevenson felt it was time to move on. So he informed producers Gene Reynolds and Larry Gelbart of his imminent departure. A decision was made to create an episode giving Henry Blake a celebratory sendoff.

The cast had remained stable during these first three years. Characters had been added periodically who weren’t in the original movie. For instance, Corporal Klinger appeared in the fourth episode. His was supposed to be a one-time appearance, but the popularity of a dress-wearing discharge seeker made him a permanent resident. Another character, Spear Chucker Jones, slipped away with little notice.

But Henry’s departure would be the first major cast change the show would face.

The final episode of the third season opened with Radar entering the O.R. (masked, this time) and informing Henry that he had a letter informing him that he had accumulated enough points to be sent home.

The usual sentimental goodbyes are said, in hilarious style, as was still the case with the writers. Finally, Henry says his final farewells and boards a chopper to take him to the airport.

The next scene is the aforementioned one where Radar makes the announcement.

The shock that you saw on the doctors’ and nurses’ faces was real. Alan Alda was the only one in the room who knew what was going to happen.

Henry’s ending was a polarizing moment. Many felt it lifted MASH to new heights, introducing genuine tragedy to the series, a certain component of war. However, many others were angered that the light-hearted comedy would take such a serious turn.

Mclean Stevenson himself was not pleased. He was watching the filming of the scene, anticipating a cast party afterwards. When it was over, he got up and walked out. The rest of the cast was pretty shaken up as well, and the party was canceled.

Wayne Rogers also left the show at that point, and his departure was written into the first episode of the fourth season.

The show definitely took a different turn at that point. It remained a ratings giant as its plots began turning towards a strong antiwar sentiment. An air of self-righteousness began to form, particularly with Alda’s Hawkeye character. While the numbers remained strong, this fan found himself longing for the days when comedy was the show’s king.

Today, the consensus seems to be that Henry’s death was a powerful, effective statement on the tragedy that is war. But it sure shook things up in 1975.