Sweet summertime was at its sweetest for a kid in the 60’s. No school! Staying up late! Sleeping in! And, best of all, SWIMMING ALL DAY LONG!

Miami, Oklahoma had a huge public pool that was (and still is, I’m happy to say, even though it has inexplicably shrunk) gorgeous. I searched online in vain for photos of the actual facility. But on a hot summer day, it looked very much like the photo to the left.

Half of the pool was the kid’s area. A rope separated it from the deeper end. I spent a couple of summers confined to the shallow depths. But if you could swim all the way across the pool, you were allowed access to the Most Holy: the DIVING BOARDS!

The Miami Municipal Pool had a simple but effective policy: A child under the age of ten had to stay on the shallow side of the rope unless he or she could swim across the width of the pool ,without having to stop. 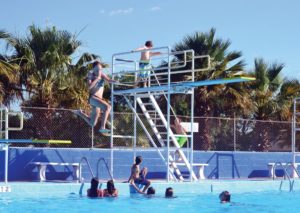 In the summer of 1967, I began attempting to swim from one side of the pool to the other, a distance of probably 75 feet. At first, I would tire out and have to stand up halfway across, but my endurance increased. Finally, I made it the entire way! I went up to a lifeguard and requested an audition.

To my surprise, I didn’t have to swim the width of the pool, only out to the island in the middle of the deep end and back. Piece of cake! Probably sixty feet total.

I completed the test perfectly, and was granted the revered access to the deep end. I was so excited I almost bawled.

I made a beeline to the Most Holy. Miami’s pool had three boards of varying heights above the water. It wasn’t long before I was climbing the ten foot ladder that led to the high dive’s altitude.

My love of swimming, in addition to my seven-year-old fearlessness, caused me to be quite the spectacle. Older kids would goad me into trying multiple flips, and once I learned to tuck, I was doing one-and-a-halfs from the three foot board. I had lots of belly busters during the learning experience, but they don’t hurt so badly when you weigh fifty pounds. 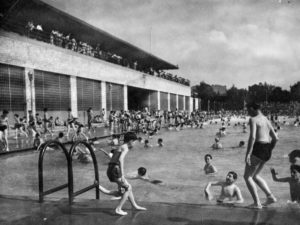 Mom would drop me off at the pool when it opened, around 11:00, if I recall. I would swim until late afternoon. Then, on the ride home, I would suddenly be aware of how FAMISHED I was!

Swimming burns lots of calories. And when you start the day weighing fifty pounds, you probably lose a significant percentage of your mass to treading water and climbing ladders. Ergo, swimming starvation.

I would go home and gorge myself on snacks before dinner. Mom would allow it, probably because she remembered experiencing the same phenomenon during the 1930’s. I still had plenty of appetite when suppertime finally arrived.

Today, of course, the times they have a-changed. Diving boards have gone the way of 29 cent gas, Nehru jackets, and ten-cent Cokes. Society has become a place where people expect to be protected from their own stupidity, or else they will grab the Yellow Pages and phone up a shyster with an ad spanning two full pages. Law schools graduate tens of thousands more each year, God help us. Municipalities can’t afford the liability insurance it takes to have high dives, or even any diving boards at all. So our grandkids slide into the water through long enclosed tubes that protect them from any harm whatsoever as they slowly descend to the four-foot depths.

What a shame. There’s nothing like the rush a seven-year-old kid would feel when he realized that he had gained access to the very same diving boards that his seventeen-year-old sibling was using.

One thought on “Swimming All Day Long”