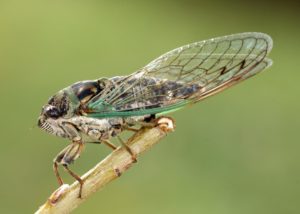 It is late May as I write today’s column. The late afternoon air is filled with a variety of sounds. These include singing birds, barking dogs, and neighbors, whose conversations are noticed because of the combination of good weather and low background sound.

But around mid-July (in my Northwest Arkansas area), the afternoon air is filled with a sound that actually has the ability to live on 365 days a year in your subconscious.

I present today’s subject as a Baby Boomer memory only because it is one I associate with my childhood, as are the vast majority of other articles I write. But untold numbers of generations have grown up with the sound of (as I put it) “yuree, yuree” echoing throughout whatever summer afternoon memories their minds can assemble.

Cicadas, or locusts, as they were known in Miami, Oklahoma, are some pretty amazing creatures. A male will mate with a female (who was impressed by his incessant “yuree, yuree” sound, complete with a natural fadeout) and die shortly afterward. Man, there must be a bunch of them because they literally sing all summer long.

Then, the female will lay eggs in tree branches, and the hatchlings will find themselves in the ground in short order. And they will spend 15 or more years there before instinctively crawling out of the dirt, climbing up a nearby tree trunk, and stopping to split open its exoskeleton to emerge as a completely dissimilar life form. For instance, its pincer front legs, so prominent in the empty hull, are gone in the adult, replaced with a massive set of wings that are arguably capable of completely blocking ultraviolet light.

Such a critter deserves to be able to plant itself into the summertime afternoon memories of humanity.

Indeed, their call is so pervasive that I often hear it subconsciously as I drift off to sleep with temperatures outside approaching 0 Fahrenheit, my window being cracked open a couple of inches because I like to sleep in the cold.