Kids spend a lot of time in their back yards. I sure spent lots of hours in my Oklahoma back yard in the 1960’s. I became so familiar with its features that I can close my eyes and imagine it in its entirety. I will now recreate that wonderful place, complete with its features unique to that era.

We had a concrete birdbath in the middle of the yard which was accompanied by a miniature flock of three plastic pink flamingos. They weathered well, I remember they lasted at least three years. That birdbath was a monster that mom picked out from one of those businesses that sold all sorts of yard stuff made of concrete. We never had one of those bright blue balls on a pillar, but my next-door neighbor did.

Like every other family on the block, we also had a clothesline that frequently was festooned with our laundry.

Dad brought home a new washer and dryer about 1966. Before that, hanging clothes outside was mom’s only option. If we were in an extended rainy period, she had an indoor version that only held a few items. So the weather determined how much clothes were washed. 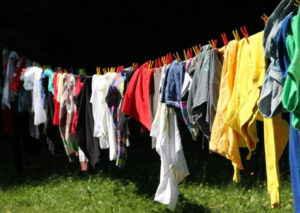 That clothesline got a lot of use after the purchase of the dryer, as well, because my Depression-era parents didn’t like to spend money on gas when the sun would dry our clothes for free.

We had big trees with white on the leaves. They were either silver maples or some sort of poplar. But they were plagued by what mom called “borers.” These were huge, garish black and white beetles with long legs and antennae. They were absolutely grotesque to look at. And the solution to keep the trees safe from them was to paint the trunks from the ground up to about six feet with white paint. The only image I could find of a painted tree trunk is the small one to the left. 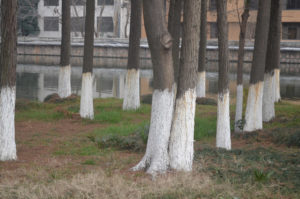 I don’t know if the paint kept the trees safe. I know that, at least in Miami, Oklahoma, white tree trunks were a very common sight in the 60’s. I haven’t seen one in a long time, though.

We had an osage orange tree on the edge of our yard. The species is also known as bois d’arc (pronounced bodark) apple. The French name pays homage to its wood being the native Americans’ choice for making bows. It would produce grapefruit-sized green fruit that would litter our yard in the late summer. It was great fun rolling them across the ground at my dog. He wasn’t crazy about it, though. 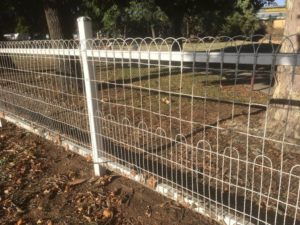 We had a corner lot with an alley along the back line, so we only had a neighbor to one side. They had a fence that looks similar to the one at the right. That fence was decrepit looking, probably having been installed fifteen or more years earlier. The neighbors were a little strange. They didn’t let their kid leave the yard, and allowed very few visitors. So we played lots of games through that fence. In fact, that looped-wire barrier is one of my strongest memories.

I also had a little swing that was suspended from one of the T-shaped clothes line poles. It’s amazing how much time a kid would spend in this simplest of contrivances, consisting of a short board and two lengths of rope. I swung in that swing until we moved away in 1968.

Today, my back yard is still a favorite place for me to be. Some day, perhaps my own children will write of playing tetherball, swimming in our above-ground pool, having fun with their dogs, and, of course, swinging in their homemade swing.