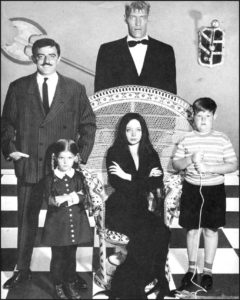 Television took a macabre twist in 1964. It began with two series that sprang out of the gate on the same week in September, beginning a frantic two-year run which ended with both shows closing up shop within a month of each other in the spring of 1966.

However, that didn’t end the contest. Both series continue to live on in syndication, and feature films have also been inspired by the rival monster comedies.

The battle began back in the 1930’s, with a single-panel cartoon debuting in The New Yorker magazine called The Addams Family. Created by Charles Addams, it was a satirical look at well-to-do Americans. The Addams Family was wealthy, and also quite creepy.

It was a hit for the magazine, and thirty years later, The Addams Family was seen as a potential TV sitcom.

The Addams Family’s humor has been called “Grouchoesque,” with Gomez Addams frequently delivering snappy one-liners while constantly carrying a cigar. That’s no coincidence, as the show’s producer was Nat Perrin, who just happened to be Groucho Marx’s close friend. He was also a writer for many Marx Brothers films.

Thus, many have judged Addams Family humor to be superior of that of the rival Munsters.

However, it might be a bit like comparing oranges to apples. While the Addams were fabulously wealthy, the Munster clan were decidedly working-class. You could picture the Addams’ jetting off to Monte Carlo for a long weekend. On the other hand, Herman Munster was more likely to load the family up into his bad-butt Munstermobile and head to the drive-in, where anyone within sight would be horrified and frightened into a stampede.

While John Astin and Fred Gwynne were the shows’ stars, by no means did they hog the camera. The appeal of both series was in the plethora of characters, including some that were imaginary. For instance, you never saw the Addams’ Kitty, you only heard a lion’s roar and observed frightened masses running away. Likewise, the Munsters kept a fire-breathing dragon which would only show glowing eyes and, of course, lots of fire.

While practically all of the characters had their own eccentricities (the exception being the deliberately straight role of Marilyn Munster), the most whacked, and thereby the most appealing, were Uncle Fester and Grandpa Munster.

Veteran comedy actor Jackie Coogan, who is fondly remembered as the kid in Charlie Chaplin’s 1921 film The Kid, played Fester, who had a penchant for causing explosions in the basement laboratory. He would generally steal any scene in which he appeared.

Grandpa Munster likewise was prone to basement lab explosions. He also possessed an acerbic wit, frequently aimed at his son-in-law. Again, he was a scene-stealer.

But the rich supply of family members (as well as the Addams’ servant, Lurch) made it impossible for anyone to dominate the limelight for long. Eddie Munster would get the occasional episode that concentrated on his character, as would the Addams’ hand-in-a-box known as Thing. BTW, Thing was portrayed by Ted Cassidy (Lurch) except for the occasional scene where Lurch and Thing appeared together, assistant director Jack Voglin becoming Thing in such cases.

By 1966, America had grown weary of black-and-white monster comedies. Batman, in living color, showed up in January of that year, putting an appropriate coffin nail in the two shows.

Since then, all three franchises have shown lots more life in the form of feature and TV movies. There was also The Munsters Today, which ran from 1988-1991 and actually lasted two episodes longer than its predecessor. For the life of me, I can’t remember it.

Who ultimately won the rivalry? I have to give the competitive edge to The Addams Family over The Munsters, at least as far as theme songs go. It’s way too much fun to join in by snapping one’s fingers.