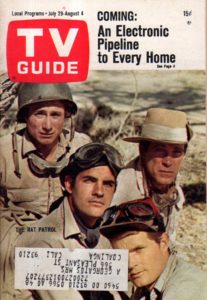 There were a lot of WWII veterans in the US during the 60’s. Our fathers (and some of our mothers) who served in the war were now in their 30’s and 40’s. They were likely the single biggest demographic group out there, and the TV networks wanted their business.

WWII was a long, horrible, bloody, tragic blot on history. But the fact is that the US and its allies kicked the butts of those who would take over the world by force and rule with an iron hand.

Thus, our parents felt proud of what was accomplished, and the war was greatly romanticized in the eyes of the media. That meant that it was great fodder for TV.

Many a WWII drama was aired on the one-eyed monster during the 60’s. And we kids watched them along with our parents. Our fathers knew that the action had been greatly bowdlerized, but that didn’t stop them from tuning in anyway. And the success of the shows ensured that many a slightly cheesy half-hour episode would be churned out while the viewers continued to tune in.

Combat! was the most successful of the WWII dramas. It debuted in 1962 and ran for five seasons. It took an approach that was the most realistic of the bunch. War wasn’t glamorized. Instead, the characters were depicted as weary, shell-shocked individuals who felt an obligation to put the interests of army and country ahead of their own. They were disillusioned, to be sure, but felt compelled to keep plugging along anyway.

The show was a hit, and may have lasted deeper into the Vietnam era had ABC not cheaped out on stars Vic Morrow and Rick Jason. They had signed five-year contracts, while other actors had opted for seven. Rather than renegotiating with the two, ABC chose to rewrite the series as Garrison’s Guerrillas, minus the characters of Saunders and Hanley. As you would expect from such cheapskate techniques, the replacement series was quite pale in comparison, and was gone after a single season.

You can read the autobiography of Rick Jason in its entirety at http://www.scrapbooksofmymind.com/. Pretty interesting stuff.

Twelve O’clock High was based on a successful 1949 movie starring Gregory Peck. The series debuted in fall 1964 and lasted three years. It started out in B&W, and was known for featuring actual combat footage. In 1967, it began to be broadcast in color, but only lasted halfway through the season.

What was impressive about the show was that a real B-17 was flown for many of the scenes! That wasn’t a cheap thing, and one of the signs that the show was heading downhill was the conspicuous reduced air time of the bomber during the last season, replaced with “patrols” of a P-51 Mustang, which was much cheaper to fly. 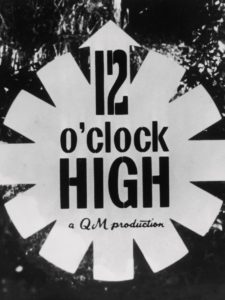 The Rat Patrol debuted in 1966. It started out in color, and featured the single most instantly recognizable jeep in the eyes of a 1960’s kid. It had this incredibly bonzer 50 caliber machine gun mounted in the back. The characters patrolled north Africa, making General Rommel’s life as miserable as possible, and sending many a clueless German soldier to the promised land.

The show lasted two years. 1968 marked a changed perception of war in general for the country, as kids were being shipped home in boxes from Vietnam in ever-increasing numbers, and Dan Rather’s reports were gritty in their depiction of the misery going on over there. The spreads in the various pictorial weeklies showed little girls getting burned with napalm, Buddhist monks going up in flames, and executions carried out with a bullet to the head.

People stopped tuning into war dramas, and the genre went away for a while.

Interest in WWII was rekindled in 1998 with the success of Saving Private Ryan, which led into HBO’s Band of Brothers a couple of years later. The movie and TV series depicted war in all its gritty realism, with grisly death shown uncompromisingly.

That was impossible for network TV series during the 60’s, of course. But the nightly news and weekly magazines of the era demonstrated that when war is shown in a largely uncensored state while it’s actually going on, it’s compelling. But what it’s not is good advertising for heroic war dramas on television.

One last observation: possibly, my mom harbored at least a little resentment to Germany and Japan over the war. While I was swiftly and decidedly punished for using ethnic terms that were still common in the 1960’s, she never seemed to have a problem with me referring to “Krauts” and “Japs” when I was playing army. Perhaps the free usage of the words by the patriotic press of the 40’s put them in a different category.