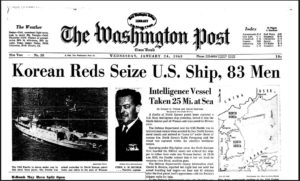 If you youngsters out there think that North Korea’s current ruler is a nutcase, you would be right. But if you think he’s the first, well, then you don’t remember the news headlines of 1968.

In January of that year, the USS Pueblo was on patrol in international waters in the Sea of Japan. Her mission was to monitor communications from North Korea. On the 22nd, two DPRK fishing trawlers approached the ship and circled her for a while. Captain Lloyd Bucher radioed the incident in, but such actions weren’t uncommon, and he wasn’t unduly alarmed.

What he was NOT aware of were the events that had recently taken place on the mainland. The night before, 31 North Korean soldiers had crossed the ironically named DMZ and headed for the Presidential Palace. Their mission: assassinate the President of South Korea.

They were apprehended within a block of their goal, and thirty of them ended up losing their lives in the ensuing battle. The lone survivor revealed the nature of their mission.

Thus, tension was quite high on both sides of the border when the Pueblo was spotted. Within hours of their encounter with the fishing boats, they were approached at high speed by a warship at full battle stations.

The crew of the Pueblo couldn’t have fought back if they had wanted to. Their guns were stowed in tarps under a layer of ice.

Soon, other warships joined the first, and Captain Bucher was ordered to allow boarding to take place. The Pueblo attempted to flee, but the warships were much faster, and began firing. One crew member was killed. Bucher ordered his crew to destroy all sensitive materials, and papers went into the incinerator, and big hammers were used on surveillance equipment. However, much sensitive information and equipment was spared.

By now herded into North Korean waters, the Pueblo was finally boarded. The crew was beaten and blindfolded, and the ship sailed to Wosnan.

A happy crowd cheered the arrival of the ship and the unloading of its captives.

The US assembled a task force in the Sea of Japan, and tensions remained very high. However, North Korea was very well armed, and would be joined by other communist nations in the event of attack. So a waiting game began.

It was during this time that the captain and crew showed a remarkable amount of defiance and resistance in the face of torture and interrogation. This was revealed in the photographs that were taken by the captors and sent to America.

Interestingly, the crew members were often shown extending a middle finger in a casual manner. Hmm…

Additionally, the captain was ordered to sign a confession of wrongdoing. The problem was that nobody among the North Korean authorities could speak English well enough to put one together. Ergo, Captain Bucher was ordered to write the confession himself.

Bozo and the rest of the heavily armed clowns were able to verify that the words Bucher used were legitimate, but unable to keep him from making another statement altogether. Example: “We paean the DPRK. We paean the Korean people. We paean their great leader Kim Il Sung.”

The crew also explained that the extended middle finger was a Hawaiian gesture of good luck. The Koreans accepted this, and were quite frequently wished good fortune by the crew afterwards. All was well until Timemagazine put a photo of the crew on the cover, and someone in North Korea with enough knowledge of English spilled the beans that, as the accompanying article revealed, the gesture was obscene.

After eleven months, the crew was finally released in exchange for an admission by the US that they were, in fact, spying, and a promise to never, ever do it again. The Pueblo itself, however, continues to sit in Pyongyang, now a tourist attraction.

In 1973, a TV movie starring Hal Holbrook as Captain Bucher was made about the incident. I was amazed to see the crews’ defiant flipping of the bird on primetime television. That simply wasn’t done back in those days. But it made for a warm feeling, seeing that the spirit of the captives remained intact throughout their detention.

The Pueblo incident wasn’t all heroics, though. Captain Bucher and Officer in Charge of the Research Department, Lt Steve Harris, were afterwards investigated and court martials were recommended. However, the SecNav refused to allow it, saying the men had suffered enough.

Thus ended an incident that defines the relationship between North Korea and the US, one that has been consistently hostile since the Korean War. The captured Pueblo continues to be operated as a tourist attraction by the North Korean government.

Here’s wishing good luck to them. 😉