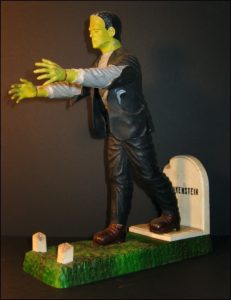 Today’s memory will be viewed through my eyes as an observer, not a participant. I don’t recall ever making an Aurora monster model, but I played in the bedrooms of many of my friends that had shelves with the likes of Frankenstein, the Wolfman, Dracula, and the Creature from the Black Lagoon staring menacingly at us while we played with our Tonkas, green army men, or whatever else was on hand.

These things were creepy looking indeed. The plastic was molded into detail that revealed every fang, bloody gash, or severed limb.

Of course, you needed plenty of red Testor’s enamel to provide the bloody highlights necessary to make your monster seem real.

These flicks were responsible for nightmares our parents might have had long before we were born, in their original theatrical releases. But in the late 1950’s, TV stations started airing them in late night horrorfests held on Friday and Saturday nights. When I was a teenager in the 70’s, a TV station in Ft. Smith, Arkansas showed Boo! Theater on Saturday nights, replaying the classics (and some Ed Wood offerings that weren’t so classic).

You don’t see them so much any more, but late night horror flicks were a steady source of revenue for TV stations when we were kids.

Anyhow, all those old monster movies created a tremendous interest in the monsters themselves among that solid gold demographic of Baby Boomer kids whose parents happened to be able to spare a few bucks here and there for the indulgence of their offspring. And the Aurora Model Company took notice.

They began marketing the garish models in the early 60’s, and kids started grabbing them up.  Soon, bloody monsters were festooning bedrooms all over the US. And kids were painstakingly snapping the various parts loose from the plastic spines which were part of the molding process, carefully painting the pieces with tiny brushes and extremely redolent enamel, and then assembling them with model glue, ten times as smelly as the paint.

Aurora lasted through most of the economically turbulent 70’s, but finally went belly-up in 1978. During the 70’s, they introduced glow-in-the-dark monsters, which gave them a temporary rise in sales. Alas, it wasn’t enough to survive the Recession.

There are a whole bunch of sites out there dedicated to memories of Aurora monster models. Try searching for “aurora models” on Google.