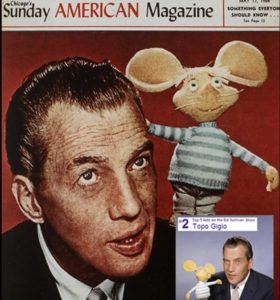 One of the most popular search terms people use for this site is “popo gigo.” This proves two things. First of all the animated Italian mouse continues to have a worldwide following, and second, people have a hard time with his name!

Well, I’ll drop the term Popo Gigo two or three times into this article to help them find us. Indeed, in Japanese the mouse is properly known as Toppo Jijo and Topo Jijo. There, that should get Google involved in sending me more curious folks who remember a mouse with an Italian accent. Because, after all, I Remember JFK is THE source of all things nostalgia to the Baby Boomer generation, right? 😉

Topo Gigio was the creation of Italian animator Maria Perego. The stick-controlled foam rubber puppet was a big hit on Italian TV in the early 60’s, and Ed Sullivan’s staff got wind of the mouse’s popularity among children and adults. Thus Topo Gigio made his first appearance on April 14, 1963, just in time for me (as well as millions of other 60’s kids) to become an ardent fan. 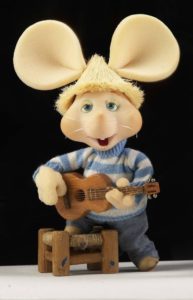 Researching this piece opened my eyes up to a correction of something I had believed all my life: that Topo Gigio was French. That’s probably some sort of great insult to both cultures. I guess I just didn’t understand the subtle nuances between the Latin-based languages when I was five.

It was a team effort to make Topo Gigio come alive. According to a source I found in 2008:

The puppeteers moved Topo with their hands and three inch sticks. Maria Perego, Topo’s creator, moved Topo’s mouth and legs. Frederico Giolo moved Topo’s arms, while his wife Annabella controlled the puppets oversized ears. The man who gave Topo his voice was Peppino Mazullo (some sources have called him Giuseppe Mazullo), who provided it offstage.

If I recall correctly, Topo Gigio would make his appearances late in the show. He would appear in his nightclothes and parry with “Eddie” for a couple of minutes before telling him that he must go to sleep and dream. Many times, the object of his dreaming was his sweetheart, Rosie. Then Ed would give him a kiss and he would crawl into his little bed.

Such a ritual was very therapeutic for a kid who was terrified by the prospect of waking up shaking from a nightmare. Little Topo Gigio let me know that dreaming was, indeed, a wonderful thing, to be looked forward to. After he went to sleep, I was ready to do likewise.

The diminutive mouse was a regular fixture of the show right up until its final 1971 episode. He might have vanished at that point, and for the English-speaking world, an argument might have been made that he did indeed do just that.

But remember Topo Gigio was an Italian creation. And despite losing the weekly boost in popularity from “Eddie,” his creators continued to market the mouse to the rest of the world.

The result is that today, Topo Gigio has a huge following among the Spanish-speaking and Japanese-speaking world. Topo appears (as Toppo Jijo) in Japanese anime cartoons. So today, millions of Japanese children are planting memories of the very same mouse that we Boomers fell in love with way back in the 60’s, albeit in a completely different format.

He has also been the subject of record albums and videos released all over South America. Thus, the popularity of the product of Ms. Perego’s imagination has, in many ways, surpassed that of “Eddie” himself, whose show planted the mouse in our Boomer memories.

Here’s a Youtube video of Sullivan and Topo Gigio doing their thing.