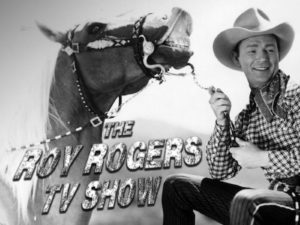 Thus sang Elton John on his 1973 album Goodbye Yellow Brick Road. Bernie Taupin, the writer of “Roy Rogers,” had fond memories of watching the golden western hero as a child, and so do most Boomers. Those old enough to recall the 50’s enjoyed his adventures on prime time TV, the rest of us got our weekday reruns.

The 1950’s, the first complete decade of TV, was wholly, totally, completely dominated by the genre of the western. In March, 1959, westerns held eight of the top ten spots of the Nielsen Ratings. Not only were there a multitude of series, but many low budget western films were aired to fill time that would otherwise be dead air, as the networks were not yet able to fill out schedules like they do today. No wonder that six shooters, holsters, spurs, and cowboy boots and hats were some of the largest selling toys of the era.

The decade began with Hopalong Cassidy, The Lone Ranger, Gene Autry, and The Cisco Kid. Other shows that came along later during the Decade of the Western included Roy Rogers, Annie Oakley, Life and Legend of Wyatt Earp, Cheyenne, Sugarfoot, Bronco, Johny Ringo, Tales of Wells Fargo, Have Gun Will Travel, Wagon Train, Maverick, The Restless Gun, Wanted Dead or Alive, The Rifleman, Lawman, Rawhide, The Deputy, Laramie, The Rebel, and Bat Masterson. That’s an amazing collection of horse operas!

Three other western shows spawned in the 50’s deserve special mention. The first is Bonanza, which first aired on September 12, 1959. This show, a favorite of the Enderland household, lasted an impressive fourteen years, airing its last episode in 1973. The second is Gunsmoke, which ran from 1955 to 1975, an amazing twenty years. Somehow, Miss Kitty stayed foxy throughout the whole run. But the longest running western you probably forgot about was Death Valley Days. This show first aired in 1952, and lasted an astounding twenty-three years!

Syndicated during its entire run, the show had a number of formats. From 1952 to 1965, it followed the adventures of the Old Ranger, played by Stanley Andrews. Ronald Reagan took over as host in 65, stepping aside to run for governor of California. Robert Taylor took over, followed by Dale Robertson. Despite the fact that no new episodes were filmed after 1970, new footage was spliced in to create new shows. Merle Haggard narrated many of them.

What you’ll remember best was the main advertiser: Twenty Mule Team Borax. That venerable team of mules trudging along in the hot desert sun was a part of nearly every episode. Boraxo, a hand soap, was also hawked vigorously in between action shots.

But back to the decade which spawned the series, specifically my own recollections.

I never saw many of the series which failed to score in syndication. But I did watch a lot of Lone Ranger, Roy Rogers, Have Gun Will Travel, and The Rifleman. These shows all did well in syndication, and were viewable by 60’s brats on the idiot box after school.

The western genre continued to ride high throughout the 60’s. The Virginian, The Big Valley, High Chaperral, Laredo, Daniel Boone (not technically a western, but come on!), and the offbeat The Wild Wild West all aired with varying degrees of success during the turbulent Decade of Change. But as the 70’s rolled on, the number of new westerns began to dwindle. Only one series debuted and ran longer than a single season, Alias Smith and Jones. Amazingly, a single western series was released in the 80’s: ABC’s Wildside. It died a quick six-episode death up against NBC’s must-see TV on Thursday night.

Westerns made a modest comeback in the 90’s. Lonesome Dove was a highly acclaimed miniseries that scored high on the Nielsens. The Young Riders (actually launched in 1989) had a good run, and so did Dr. Quinn, Medicine Woman.

No problem. That’s what our memory banks are for.