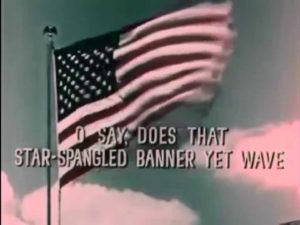 Are you wide awake at 3:00 AM? Are you staring at the ceiling? Is reading a book too much work? No problem, there is always something on the idiot box.

Nowadays, practically every TV station is a 24/7 affair. Even local stations run all night, selling the wee hours of the morning to infomercial producers. You can ease your insomnia by watching a long sales pitch for a George Foreman grill, a diet plan that is guaranteed to make you look like an anorexic, or a mattress that heats up, adjusts for different firmness, and lets your dogs out when they need to go.

But go back to our childhood years, and you can remember when the station would shut off the lights shortly after Johnny Carson (my Tonight Show host, perhaps you recall Jack Paar, or even Steve Allen) would say goodnight. 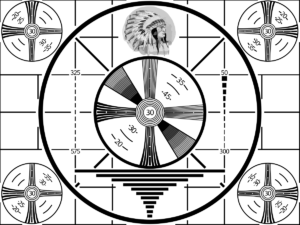 The signoffs I remember would commence with an announcement by a member of the station personnel thanking me for watching, and letting me know that the broadcast day was now coming to a close. I was invited to tune in at 6:00 AM tomorrow morning for a local country music show (I guess C&W fans were early risers). Then, the National Anthem was played, followed by a video of a jet fighter flying through the clouds while a poem called “High Flight” was recited. The poem went like this:

Oh! I have slipped the surly bonds of earth
And danced the skies on laughter-silvered wings;
Sunward I’ve climbed, and joined the tumbling mirth
Of sun-split clouds – and done a hundred things
You have not dreamed of – wheeled and soared and swung
High in the sunlit silence. Hov’ring there
I’ve chased the shouting wind along, and flung
My eager craft through footless halls of air.
Up, up the long delirious, burning blue,
I’ve topped the windswept heights with easy grace
Where never lark, or even eagle flew –
And, while with silent lifting mind I’ve trod
The high untresspassed sanctity of space,
Put out my hand and touched the face of God.

Now don’t get me wrong. That is one seriously great poem. But what does it have to do with a station signing off?

Anyhow, the next thing you would see would be the Star Spangled Banner playing, followed by the Indian head test pattern, accompanied with a shrill, obnoxious shrieking sound.

Now THAT one I have figured out. It’s like when your company won’t leave and you flash the lights off and on to give them a nudge out the door. The shriek was telling you to turn the blasted TV off and go to bed like decent folks!

After a few minutes, the screen would turn to static, as the station shut the power to the transmitter off.

The next morning, about 5:45 AM, the color bar test pattern would appear. One of our three stations would announce what the colors were with a recorded voice every couple of minutes, so you could use your fine tuning, tint, and hue controls on your color TV to match them as well as your imagination would allow. After all, everybody knows what exact shade cyan is, right?

Anyhow, at about 5:57, the broadcast day would begin, with the playing of the National Anthem again, and some official-sounding announcements about power, frequency, and other technical data that was likely required by the FCC.

Tom Snyder goofed things up for local stations by beginning Tomorrow in 1973, a show that would extend signoff times by an hour for its NBC affiliates. Soon, other later-than-late shows appeared, and some stations decided to run all night, showing old movies and such in the off hours.

Cable changed everything, and in 1979, ESPN showed 24 hours of sports. Of course, some of the sports included badminton, spelling bees, and the immortal Australian Rules Football, but station signoffs dwindled faster than ever. Today, it’s rare that a station signs off.

The fact that we have 24/7 TV only adds to its place as an important part of our lives. I don’t see a whole lot good about that.

Maybe TNT could start signing off at midnight local time, with a reading of High Flight, of course. Hey, I think Law and Order rerun fans would survive.

8 thoughts on “When TV Stations Signed Off at Midnight”