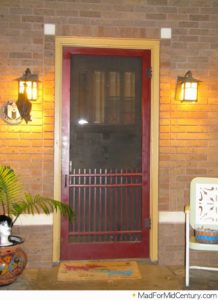 Well, I Remember JFK has uncovered yet another conspiracy theory. Recall that we revealed that wing vent windows were surreptitiously phased out by auto air conditioning manufacturers. Well, faithful readers, we have blown the cover off of yet another cabal by those who sell equipment designed for artificial environmental cooling: the demise of the screen door.

The above paragraph is written tongue-in-cheekingly. Please, no nutcases need respond 😉

When we were kids, wooden screen doors were everywhere. Moonwink Grocery in Miami, Oklahoma had one. It may have had a Rainbo Bread advertisement, advising all who would enter that it was GOOD bread. Or perhaps it was Bunny bread, a locally-baked rival.

But it was definitely there, providing a reassuring “thunk!” every time a customer walked in or out. It was a sound that I must have heard hundreds of times, and I would dearly love to return in time to hear it again.

But that’s what our imaginations are for. So please, read on as I magically transport you to an era when we passed through screen doors many times a day in our travels. 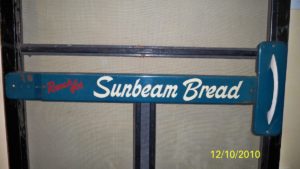 The utility of screen doors was undeniable. Have one at the north and south ends of a house, and you had yourself a wonderful breeze providing fresh air, cooler temperatures, and a dearth of flies. Metallic screening used in screen doors and windows was patented on April 22, 1884 by John Golding of Chicago, Illinois. Prior to that, people bought lots more flyswatters.

By the time I was in the process of being a kid in the 1960’s, old-style screen doors were already being supplanted one at a time in private homes with aluminum storm doors. My childhood home had one of the newfangled models which, if I recall correctly, was installed by my father as an add-on.

But my grandparents, who lived in the Mason, Texas house that they bought as newlweds early in the 20th century, had screen doors on all sides. They were equipped with holder gadgets that would grab the door when it shut. I was fascinated by the mechanisms, as I had never seen them anywhere else in my youthful experience. In researching this article, however, I see that they are still out there, looking much like the models that my grandparents probably purchased when Babe Ruth was a pitcher for the Red Sox. 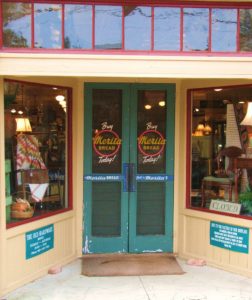 Air conditioning was still a luxury for many homes and businesses in the 60’s. Moonwink Grocery, which was probably built prior to WWII, had none. So on a hot summer day, the screen door provided some cooling relief, along with fans placed everywhere. It wasn’t much, but it felt like it was back then.

In dryer environments, evaporative coolers worked hand-in-hand with screen doors to provide fresh cooled air that was exhausted through strategically placed openings in the house that allowed the sweet relief to pass through every section.

But as the 60’s turned into the 70’s, air conditioning became cheaper. Businesses in old unrefrigerated buildings either remodeled or relocated. Moonwink, sadly, was razed and fourplexes were put up on its corner lot. More sadly, the wonderful corner grocery didn’t bother to relocate.

And with homes no longer needing to let the slightly-cooler-than-a-hot-summer-day breeze blow through, screen doors became obsolete.

That leads us to today, Wooden screen doors on the fronts of houses are as scarce as quality reality television. Some exist on the back sides of homes, primarily proving ingress and egress to screened-in porches. But by and large, we now walk into our homes and businesses through glass doors.

So the next time you daydream about being a kid in a much simpler time, don’t forget to shut the screen door tight behind you. We don’t want those flies to get in.