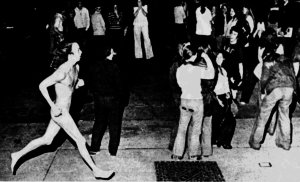 1974 dawned with no hint of its significance. In January, it was just another year. By December, people running around naked in public had become commonplace enough to become, well, boring.

Streaking had been going on at college campuses before that. Princeton was streaked as early as 1970. Notre Dame had a “streaker’s Olympics” in 1972. But the fad hit the big time in the spring of 1974, when students at colleges in southern California and Florida were shedding all of their clothes (except for sneakers, of course) and running across their campuses.

Soon, naked people were seen on newscasts, sporting events, parades, and in at least one state legislative session. The “Streaker of the House” interrupted a meeting of the Hawaiian body of lawmakers. 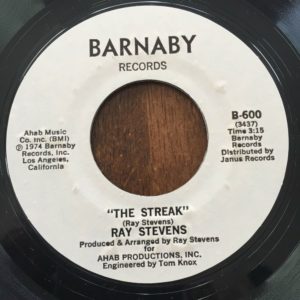 As the year wore on, streakers went for style, rather than mere running. There were bicycling streakers, roller skating streakers, horseback-riding streakers, pogo sticking streakers, the list goes on and on. Even streaking skydivers dropped out of the sky, although wearing a parachute could arguably cross the line of what defines nudity.

Ray Stevens saw the opportunity to cash in on the fad, and did so big time with his song “The Streak.” The goofy classic hit #1 that year of 1974.

The University of Georgia was the home of the largest simultaneous streak in history. On March 7 of that year, when it’s still quite chilly in Athens, 1,543 students went for a naked run.

Streaking became the hot new activity for the nation’s youth. My school superintendent felt worried enough that an announcement was made warning any potential streakers of the very dire consequences they would experience if they should choose to shed their clothing and take off across the Pea Ridge High School campus.

My all-time favorite streaking moment was when the Oscar streaker did his thing that year. I’ve always been a David Niven fan, but he became my all-time favorite British actor the night the streaker ran in front of him flashing the peace sign on the April 2, 1974 presentations of the 46th Academy Awards. The affable, ever clever Mr. Niven didn’t hesitate for a second before stating “Isn’t it fascinating to think that probably the only laugh that man will ever get in his life is by stripping off and showing his shortcomings?”

By the time the weather turned cold in 1974, streaking as a craze had ended. But occasional streakers continue to show up, mainly at big sporting events. European soccer seems to be a popular arena for naked runners these days, if the proliferation of YouTube videos is any indication. And of course streaking, like practically everything else that was done for the joy of it, has been officially sanctioned by Big Business. Nike has a commercial showing a soccer streaker wearing a certain brand of shoes. Care to guess which?

So here’s to a fad that kept us distracted from things like Watergate woes one year in the 70’s. BTW, if any of you readers ever actually streaked, I’d love to hear about it.