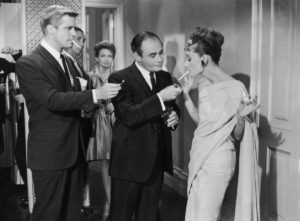 If a TV show or movie about the 50’s or 60’s is REALLY authentic, it shows nearly everyone above the age of 21 having a smoke.

Our generation was perhaps the smokingest one in history, at least during those two decades. And no wonder! We were bombarded with ads on TV, radio, in newspapers, magazines, and billboards. And we had a pretty good idea that it was bad for us, but we weren’t 100% sure.

In 1947, Merle Travis’s Smoke, Smoke that Cigarette painted a dark picture of tobacco addiction and its ultimate effect: death. But it was not until 1966 that the US government finally required labeling on cigarette packs stating that “Smoking may be hazardous to your health.”

In my house, the warning had an immediate effect. Mom was a Salem chain smoker, and as soon as I was old enough to read that warning, I began hounding her to stop. She finally did, a few years later.

Smoking began declining late in the 60’s, but it was still extremely commonplace. The idea of a smoke-free restaurant, or even a smoke-free SECTION of a restaurant, was inconceivable. If you went out to eat, you smelled cigarette smoke. It was a given. 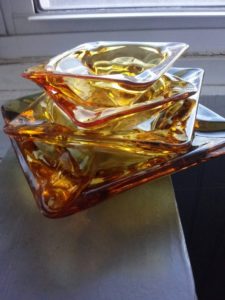 All cars had ash trays. So did the vast majority of homes. Movie stars like John Wayne hawked cigarettes, though he filmed many anti-smoking ads late in life as he fought cancer.

Speaking of the ads! TV advertising was banned in 1970. Yet, even though I was only ten when I heard my last cigarette commercial, I can easily recite at least twenty jingles and slogans that I heard over and over.

Smoking was simply cool. That’s why so many teenagers did it. There was a stern warning on cigarette machines warning minors not to operate them, but it was never enforced. Therefore, many eighteen-year-olds already had two-pack habits.

A commercial aired the same year that the warning appeared on cigarette packs that was replayed for at least twenty years afterwards. It was a kid imitating his father’s every move, including picking up a pack of cigarettes and having a look at them immediately after his father had lit up.

Smoking has a negative reputation these days. Smoking is no longer allowed in many establishments any more. You can’t smoke on US domestic air flights. But in the 50’s and 60’s, it was everywhere. We grew up smelling it, and got to where we didn’t even notice it anymore.