In November, 1963, Lyndon Johnson found himself suddenly thrust into the role of President. His wife Ladybird was equally shocked to be the new First Lady.

Ladybird Johnson, nee Taylor, was a woman of Texas stock who was sure of her convictions, and was not afraid to stand behind them. So she promptly got to work on something she believed in very strongly: the beautification of America.

She was a woman of high intelligence and business sense. She had received a substantial inheritance, and used part of it to purchase an Austin, Texas TV station over her husband’s objections. She gently reminded him that she was spending her money, not his. The station ended up being Austin’s sole VHF-transmitted franchise for many years, and her investment paid off very handsomely indeed.

The first thing Ladybird Johnson went to work on was the overall ugly physical condition of America. Highways were lined with litter, massive billboards were being erected as fast as possible to sell advertising space along our rapidly-developing Interstate Highway System, and her memories of driving through pristine Texas Hill Country were feeling very distant indeed. 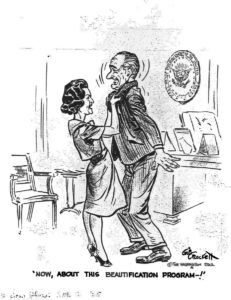 “Ugliness is so grim,” she once said. “A little beauty, something that is lovely, I think, can help create harmony which will lessen tensions.” Perhaps it seemed a little naive, but tensions were rising fast during the 60’s. Whatever might help soothe them was welcomed.

So Ladybird began doing something. She forged a friendship with American Association of Nurserymen executive Vice President Robert F. Lederer. She used his influence to encourage the planting of wildflowers along America’s highways, and also the protection of threatened wildflower species.

She also threw her weight behind the Highway Beautification Act, which would limit billboard construction and force the removal of certain types of signs along the Interstate System as well as the existing Federal-aid primary roads. The act also required certain junkyards along these byways to be removed or screened and encouraged scenic enhancement and roadside development.

Support for the bill was split along party lines, but the Democratic-controlled House and Senate ran it through, and Ladybird’s Bill, as it was known, became law.

Ladybird loved the environment, and worked hard to protect it. But she was also a driving force behind America’s Civil Rights movement.

Her mother scandalized neighbors by entertaining Negroes in her home. Her father didn’t share her mother’s views, but tolerated the practice. This had quite an effect on a little girl being raised in east Texas.

So during the 1964 election, she traveled through eight Southern states in her own train to promote the Civil Rights Act, at one point giving 45 speeches over five days. It was the first solo whistlestop tour of a mover and shaker First Lady.

The Civil Rights Act of 1964 also blew through the House and Senate, to the great consternation of many southern states. LBJ remarked to a friend after its passage that the Democratic party had lost the south for a generation.

While that particular prophecy was not to be true, the bill would never have passed without the firm backing of both Lyndon and Ladybird.

After her White House days, Ladybird continued to battle for causes that would protect the environment. By her recent death on July 11, 2007, she had backed or organized dozens of programs dedicated to beautifying her nation.

So here’s to Ladybird Johnson, a staunch Texas spirit who never shied away from rocking the boat.