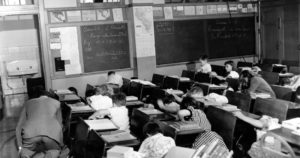 Kids have things to worry about now, for sure. In the 50’s and 60’s, we didn’t know what ozone was. Global warming? Never heard of it. Gas stations were fighting to gain the business of our parents, not putting surly clerks behind bulletproof glass to sell them fuel at per-gallon prices approaching the minimum wage.

But today’s children have never felt the paralysing fear that an air raid siren would cause, as a kid would scramble to get underneath a desk in a futile effort to cover up from the effects of a nuclear blast.

Some communitites would sound the awful siren, some would simply rely on the schools to conduct the air raid drills as they saw fit. But the schools were required to do so by many city and state governments. 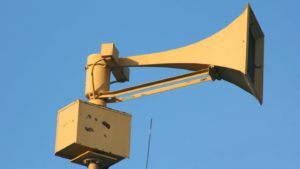 nd this was a source of contention for many. You see, the proactive nature of ducking and covering implied that the practicers of such a tactic might have a snowball’s chance in a very hot place of surviving an actual nuclear blast.

Fear became a daily part of the average American’s life beginning on August 29, 1949. That was the day the Russians, who had blockaded Berlin and had also pushed their way into Poland and Eastern Europe, turning the hapless nations into godless communist regimes, joyously announced the detonation of their first atomic bomb.

The ecstasy of winning WWII now seemed a distant memory. The threat of widespread death and destruction at the hands of the enemy now became very real to the average American.

In 1951 the film Duck and Cover was released. Don’t worry, kids, animated Bert the Turtle will teach you how to survive those pesky nuclear bombs. The first thing that you do is take cover at the first flash of a nuclear blast or first sound of a warning siren. Duck to avoid the things flying through the air, then Cover to keep from getting cut or even badly burned. Kids were also encouraged to wear metal identification tags. That way their bodies would be able to be identified by survivors.

That naive, optimistic reptile also appeared in comic books handed out to the class.

Is it any wonder that this generation would soon take to the streets to protest war?

It got much, much worse on August 12, 1953. That’s when the Russian Bear exploded its first hydrogen bomb.

Many schools began duck-and-cover drills as early as 1950. The h-bomb blast caused many, many more to join the routines.

The kids’ experience of air-raid drills ranged from boredom to terror. Teachers would sometimes lead the class in comforting prayers or religious songs as they cowered from the imaginary incendiary devices.

As the drills took place more and more often, eventually students’ fears diminished. And this was what got the dander of many up.

Realistically, there was little chance of surviving nuclear war. And the protestors viewed the drills as a way to brainwash a future generation into believeing that the Russians could be outslugged if push came to shove.

Their voice was heard, at least to a degree. Local governments began seeing the folly of educating kids on how to survive the unsurvivable. By the time I started first grade in 1965, the air-raid drills were long gone.

Sadly, nowadays kids in some communities are taught to duck and cover for another reason: the potential of a crazed gunman opening fire at random.

At least they have a shot at survival if they follow the teacher’s instructions.