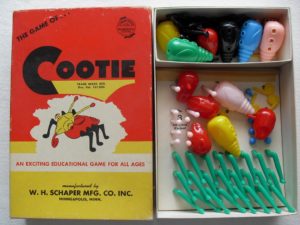 A cootie, according to the Random House Unabridged Dictionary, is defined as a louse, especially one affecting humans, as the body louse or head louse. So if you were a soldier in either world war, cooties were extremely undesirable.

However, if you were a kid born after the conclusion of the second conflict, the term had a much more pleasant definition. It referred to a game involving big plastic bugs and lucky rolls of the dice.

Cootie originated with Herb Schaper, a letter carrier for the U.S. Post Office. He envisioned a game that would be fun, educational, and profitable.

He carved the first COOTIE out of wood in 1948. In the first years, Schaper built, by hand, 40,000 wooden COOTIE games. Within three years, more than 1,200,000 were produced with the aid of machinery.

By the time I came along, the parts were made of plastic. I never had a Cootie game myself, but I had friends who did. When I would visit their homes, it was a blast playing with the bugs. Sometimes we would play the game, which required rolling a one to get started. Other times we would just build the critters and play with them.

Of course, like any game involving small plastic parts, legs, antennae, and other appendages would soon disappear down heating ducts, under furniture, and sometimes in the digestive systems of puppies. So the games would often only allow competition with less than the intended four players.

Schaper’s company remained independent until 1987, when it was acquired by Milton Bradley. They continue to crank out the game, creating memories for a new generation, and stirring them in the minds of the parents and grandparents who recall how much fun it was to create big bugs with fortunate rolls of the dice.