Our generation saw a lot of walls crumble down, for better or worse. We grew up with sweet, sugary shows like Leave It to Beaver, Andy Griffith, and Dick Van Dyke. Make no mistake, these were classic shows in their own right, but it’s impossible to picture Ward Cleaver using derogatory ethnic remarks.

However, when we think of Archie Bunker, the terms Polack, Spic, and Chink immediately pop into our minds.

Norman Lear foisted the Bunker family upon the public on January 12, 1971. It was an immediate hit, as well as an outrage to folks used to watching schmaltz like Mayberry RFD (which was NOT a classic show in its own right).

Lear chose to tackle racism the same way Mel Brooks did in his utterly brilliant Blazing Saddles. I.e., laugh at it, because the very concept is so stupid that it lacks any credibility at all. 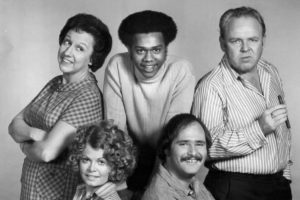 Archie and “Edit'” lived at 704 Houser Street in Queens. Mike and Gloria Stivic, his daughter and son-in-law, lived upstairs. Archie was a little right of Rush Limbaugh, and he also believed every ethnic stereotype he ever heard. Mike was a little left of Hillary Clinton, so needless to say, things were a bit lively when they got together.

Archie was further plagued by the fact that he lived in a racially diverse neighborhood, so he had to deal with spics, polacks, jungle bunnies, and the like on a daily basis. 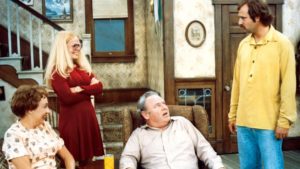 His next door neighbor was George Jefferson, who was as prejudiced toward whites as Archie was towards blacks. Lear was indeed a genius for creating situations for comedy.

Perhaps the greatest episode was on in which Archie is visited by Sammy Davis Jr. Sammy had left his briefcase in Archie’s taxi, and came over to collect it. Note this exchange between them:

Archie: Now, no prejudice intended, but I always check with the Bible on these here things. I think that, I mean if God had meant for us to be together he’d a put us together. But look what he done. He put you over in Africa, and put the rest of us in all the white countries.
Sammy Davis Jr. Well, he must’ve told ’em where we were because somebody came and got us.

When the two posed for a picture and Sammy kissed him, it made for the longest single burst of live audience laughter in TV history. Archie’s reaction was, well, priceless, and he had to hold that expression for better than two minutes.

In addition to being the #1 rated show for five consecutive years, it also spawned five successful spinoffs, as well as its own successor, Archie Bunker’s Place.

The show was loud, offensive, and it went a long way towards showing us how to ignore each other’s racial and religious makeup.