True, we Boomer kids did spend most of our lives outdoors. However, there were many sweet rainy afternoons when we passed the time by playing board games inside.

Of course, every Boomer household had Monopoly. But many other familiar board games could be found on the shelves in our bedrooms.

One game that sadly was NOT in my own bedroom was Mouse Trap. Introduced in 1963 by Ideal Toys, I remember drooling over the TV commercials that showed the bizarre mechanism that you would build which would then be powered by a steel ball, enabling you to capture an opponent’s mouse.

I never got the game, despite much begging on my part. Oh well, it’s good to have some tantalizing things just out of reach. It prepares you to face real life.

The game of Clue was introduced way back in 1948. The exercise in deductive reasoning taught many of us how to examine evidence and reach accurate conclusions. It also introduced us to such familiar characters as Professor Plum, Colonel Mustard, and Miss Scarlet.

Many a game of Clue was played during the 60’s. Its simple elegance provided untold hours of entertainment. In this way, it contrasted greatly from the mechanized Mouse Trap. But each game had its own charms. 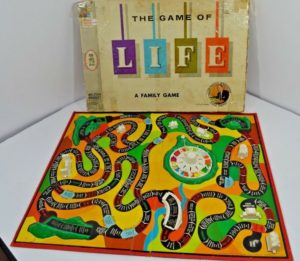 In 1965, Marx released a game called Green Ghost. The game was depicted on TV as being brightly lit up in the dark, but kids were disappointed to find that that was not the case. It was ultraviolet lighting that gave the ghost its bright green glow, sadly unavailable for most of us in the 60’s.

But the game was a lot of fun anyway, even if played in broad daylight. The object was to make your way around the board while obtaining keys to the various vaults, containing creepy items. If you were lucky, you obtained the elusive green ghost himself (named, as any Green Ghost aficionado knows, Kelly).

Lastly, I recall one of my favorite board games for a rainy afternoon: The game of Life. I was surprised to learn that this venerable game goes all the way back to 1860! That was the year Milton Bradley introduced us to a pastime that simulated life itself. The game received a rework a hundred years later, to the familiar look I remember so well. In the game of Life, you could experience marriage, college, a career, kids, and retirement at Millionaire Acres if you were lucky.

As we grew up, those wonderful board games may have gotten stored in the upper shelves of closets and went forgotten. But not always. My grandmother and I enjoyed Scrabble in the early 70’s. Nowadays, my wife and myself play at least a game a week, and we’re pretty stinkin’ good! We average a seven-letter word apiece per game, and have combined to make as many as four in a single match!

So if it’s a rainy afternoon,why not shut the idiot box off and get an old board game out? Enjoy the same simple pleasure that you remember as a child. It’s guilt-free!