As I’ve mentioned frequently, my father was tight with a buck. I found that irritating, until I grew up and realized the value of doing so for myself. Heck, the man was a financial genius.

However, as a child, it meant that I had to do without many of the toys my friends enjoyed. It wasn’t that I was deprived in any manner, it was just that while many of my friends had brand-spanking new Tonkas, I had mostly hand-me-downs.

But thanks to a fortuitous bout of the mumps, and my dad in an unusually generous mood, I was able to procure the FIRST GI Joe in my neighborhood, way back in 1965!

GI Joe was a memory shared by nearly every Boomer born from about 1955 on. Released by Hasbro at a fortuitous time for war toys, before Vietnam had become an ugly word, it was an instant huge hit. 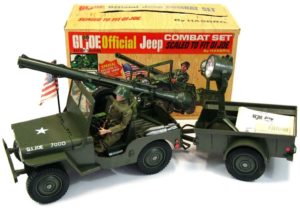 You could pick your choice of service for your GI Joe to serve in. Depicted is a sailor (with that cool hat ready to doff), but my choice was an army soldier. As I mentioned before, I was sick with the mumps and miserable. Dad said “can I get you anything to make you feel better?” Willing to take a chance, and having seen the commercial with its unforgettable jingle about a hundred times, I rolled the dice and said (a little extra pathetic added for good measure) “C . . . c . . . could I get a GI Joe?”

To my utter astonishment and delight, he said “Sure!” Before i went to bed that night, I had in my possession the first GI Joe in my Miami, Oklahoma neighborhood. He truly was, as the ad stated, a foot tall. He also had that macho scar on his face. And he came with a few accessories, as I recall. But the best part was the extras you could get, if you could cajole your parents into spending the bucks.

GI Joe was a hypnotically irresistible toy for boys. Sure, he was technically a doll, but even though girls liked to poke fun at us Joe fanatics, we all knew in our hearts that he was no doll, he was an ACTION FIGURE! No wimp like Ken, this guy could kick butt.

Unfortunately, many Joes ended up missing limbs due to the extreme adventures they were put through by their youthful owners. I remember the sad day mine lost his leg. He had been in my possession for four years of nonstop play with nary a battle scar picked up when I took him up on the roof of a building on the SW Missouri farm we lived on in 1969. He was being pursued by the enemy, and his only recourse was to dive into the stock tank below. Sadly, he hit the edge of the steel tank, and his right leg was severed at the knee.

I was sad, but Hot Wheels cars had caught my attention by then anyway. I don’t recall what ever happened to my amputee GI Joe.

As Vietnam got more and more unpopular, GI Joe turned into a non-military Adventure Team guy. I was long past my obsession by then.

But I have lots of fond memories of building Lincoln Log forts, digging foxholes and excavating shelters in the back yard, and trading accessories with friends during the 1960’s.

Speaking of accessories, look for a future piece on those. There were enough to rate their own mention.