Circa 1966, nearly every town in America with a population of 5,000 or more had at least one drive-in theater. In bigger cities, it wasn’t unusual to see two or more screens backed up to each other so more films could be shown at once.

Drive-ins were one of the earliest manifestations of the effect that Baby Boomers had on the nation’s economy. After the War, returning soldiers were buying cars and having kids. They were looking for affordable entertainment for their youngsters, and they also loved driving. Drive-ins were a natural result. Thousands were built in the 50’s, and a smaller number followed in the 60’s.

I remember going to Miami, Oklahoma’s drive-in with my parents and absolutely loving it. As hard as I’ve tried, I can’t remember any individual movies we watched, but I know that it was an absolute highlight of my summers, to be watching a movie with both parents and getting to stay up past midnight! Of course, teenagers loved the drive-in for, ah, different reasons ;-). 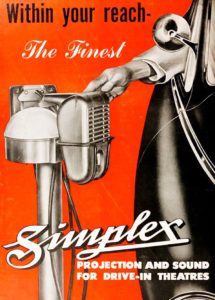 Probably, the death knell for the drive-in was sounded by enhanced theater sound. That little speaker, while having lots of character, just couldn’t compete with Dolby Digital SurroundSound.

Interestingly, drive-ins that survived the last three decades seem to be well-established and in good shape to stick around. Most offer sound via FM stereo, allowing Boomers to take advantage of those Bose stereo systems in their vehicles. Also, the drive-in experience is catching on with younger generations.

A survivor in my neck of the woods is the 112 Drive-In in Fayetteville, Arkansas. You have to line up at least an hour before sunset on summer Saturday nights to get in. They show double features every weekend, and have the aforementioned FM sound broadcast. And they have the best hamburgers on the planet in their snack bar.

Here’s hoping they resist the overwhelming pressure to sell their valuable land to a car dealership, who would love to use their perfect location. America needs drive-ins.