There may well be many of you Boomers (and others) out there who can’t relate to today’s memory. The Floridians and Los Angelenos will shake their heads quizzically, as will Minnesotans, but for different reasons. Bear with me.

Miami, Oklahoma (and my later homes in SW Missouri and NW Arkansas) had a temperate climate which allowed for hot summers and cold winters. The winters were quite mild compared to International Falls, Minnesota, but we got our share of frozen precipitation.

So a little bit of high pleasure I recall waking up to was discovering that the yard was white, so were the streets, and SCHOOL WAS CANCELED!

Mid-south towns like Miami were ill-equipped to deal with slippery streets. Since many winters would only manage a couple of two-inch snowfalls, city officials simply couldn’t justify purchasing expensive street-clearing equipment. So a modest three-inch-depth might virtually paralyze traffic for the early part of a day.

School buses made their runs first thing in the morning, so it didn’t take much snow for the school superintendent to call KGLC, the local radio station, as well as the Pittsburg, Kansas and Joplin, Missouri TV stations and give the word that would bring sheer ecstasy to kids all over town (and perhaps a slightly different emotion to their mothers). 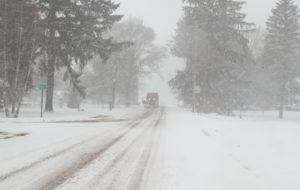 While waking up to snow and getting the good news was intoxicating enough, it was even better if a heavy snow caused a cancellation the night before! I remember we got an unusual 12″ snowfall about 1966 or so. I got to stay up late that night and sleep in on a Wednesday, in the middle of January! Life couldn’t possibly get any better. That snow gave us the rest of the week off.

Okay, my memory is not so perfect that I recall the very days I missed. But it makes for a nice story flow, don’t you think? 😉

The neighborhood kids would converge some time in the morning, and the constructions and snowball fights would commence.

It’s amazing what a group of kids with time and packable snow can accomplish. I remember my buddies and myself constructing some pretty bonzer forts. The snowball fights that would follow were legendary.

It was unusual to miss more than one day of school in Miami. Wear from traffic as well as the few trucks they had with plows would generally make school quite feasible the next day. And besides, you didn’t want to miss TOO many days, or you might have to make them up at the end of the year. I remember going to school until early June one year, probably the one when we got the really bad storm.

Of course, you Minnesotans, Wisconsans, and fellow kids from the other northern states might well have missed fewer days than I did way down in Oklahoma, thanks to your much-more-fully-equipped snow clearing crews. A three inch snow canceling school? I wish!

Hey, things even out. I was scared witless of tornadoes as a kid, due to being located just a little ways from the heart of Tornado Alley. I DESERVED my occasional snow days. 😉