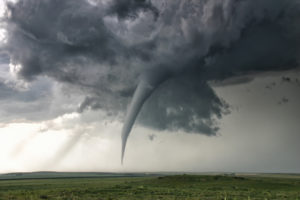 Miami, Oklahoma was located just beyond the eastern end of Tornado Alley, as defined here. The little burgh had a history of tornado touchdowns, even though they were more rare there than any typical Kansas community.

But the possibility of a tornado destroying our house was terrifying to me. And while I miss many, many things about the 60’s, one thing I don’t miss is the state of tornado forecasting that we had back then.

Miami had tornado sirens that would put me into panic mode when they filled the air with their mournful wails. In the first grade, I would even get tearful during well-publicized noontime tests. And I wasn’t the only kid in class to do so, either.

It wasn’t until the ripe old age of 45 that I actually experienced my first tornado, an F-3 that thankfully passed just over my house, yet still causing $3,000 in damages. I’m happy to say that my irrational fear is long gone, replaced by a fascination with the phenomenon. My wife had to call me in from the front yard to get in the closet a minute or so before the funnel cloud passed over.

One of the big reasons that the fear passed, besides growing older, of course, is the vastly improved state of radar tracking of tornadoes. When I hear a warning siren go off, I simply meander over to a radio and turn on the local AM affiliate that has appointed itself Watcher of the Weather and find out exactly where the tornado is and where it’s heading. Most of the time, we simply listen as it safely passes miles away.

But in the 60’s, a tornado warning siren meant, to me, impending doom. It meant that a massive funnel big enough to swallow the entire town was likely bearing down on me, and no amount of consoling by my parents could change that.

The local TV stations would show grainy radar images that further scared the daylights out of me. The radar showed black and white blotches that were meant to represent storm systems and likely funnel cloud locations, but they were pretty limited in actual information provided.

It was about this time that the word began spreading that turning your TV to channel two would warn you of a tornado in the immediate area. The idea was that you tuned to channel 13 (the highest setting on VHF) and darken your screen to nearly black. Then, tune to channel 2 (the lowest setting) and see if the screen turns white. If it does, head for cover!

Did it work? Here’s what the NOAA experts had to say about it:

The idea was that tornadic thunderstorms were very active lightning producers. However, the method had (has) several shortcomings. Not all tornadic storms produce large amounts of lightning. TV’s are not all equally sensitive, and in fact some are made to filter out lightning signals. If you are connected to cable, it won’t work. The bottom line is that the method provide completely unreliable in actual field tests. Did it work sometimes? Yes, but most of the time it did not — it either indicated a tornadic storm when none occurred, or it did not indicate the presence of such a storm when in fact one was nearby. In meteorological terms, its success score was too low and its false alarm rate too high to be of use.

But with the state of 1960’s weather forecasting, it was about as effective as Earl Ludlum (our local weatherman).

Doppler radar made some quantum leaps in the late 70’s, and severe weather forecasting became much more accurate. That eased the stress levels of many Tornado Alley dwellers, especially scared little kids. That, plus the fact that storm cells could be seen in colors that varied according to intensity (since we all had color TV’s by then), gave us all a much clearer picture of where tornadic activity was in relation to our location.

But we kids of the 60’s who grew up in tornado-prone areas can recall a time when sirens would fill us with fear and loathing, much as news of the latest gasoline price hikes do today. 😉