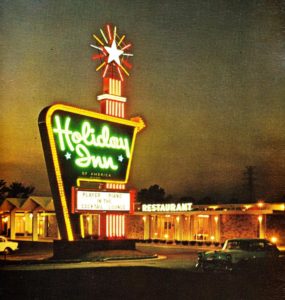 Ah, life on the road circa 1967. Where would we spend the night? Would dad pull an all-nighter and get us somewhere early in the morning? That was known to happen. Or would we stay at a nice, clean, cheap, joyless motel without a pool?

Or, would dad, feeling flush after a particularly profitable week fixing diesel trucks in his garage, spring for the ultimate experience in lodging? That would, of course, be the Holiday Inn!

Once in a while he did take the splurging plunge, and it was a moment of ecstasy for this kid when he did.

After all, Holiday Inns not only had pools, they were huge, fancy, illuminated, gorgeous pools!

And that wasn’t all. Most of them had very nice restaurants, as well. No greasy spoon experiences when we stayed at the motel with the big, friendly green sign outside!

And we kids weren’t the only ones who were thrilled. Our moms greatly enjoyed the occasional positive change in the overnight stay experience. 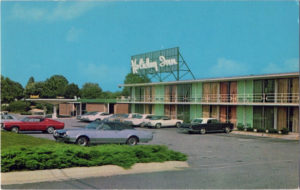 Holiday Inn got its start in Memphis, Tennessee in 1952. That was the year that Kemmons Wilson opened the first one. His idea was that American travelers needed standardized, clean, predictable, family-friendly, and readily accessible places to stay. The architect that he hired to design the building jokingly suggested that he call it Holiday Inn, after a Bing Crosby-Fred Astaire movie that had been released ten years earlier.

Wilson thought that was a splendid idea.

His idea was radical for the times. Wilson had recently traveled to Washington, DC, and was disappointed by the quality of the various motor courts that he stayed at. He envisioned a chain of 400+ Holiday Inns, each one as nice to stay overnight in as any other. So his first motel was built with the idea that it would be far from the last.

By then, Holiday Inns had become a part of folklore. On his 1971 album Madman Across the Water, Elton John featured one of my favorite songs, Holiday Inn. It’s a good-natured poke at the chain, which was one of his commonest places to crash on long road tours early in his career. 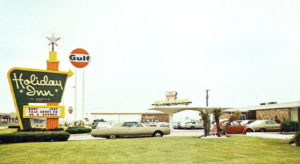 One of the things that Holiday Inns had going for them was a far-ahead-of-its-time reservation system known as Holidex. Many years before the internet, you could reserve your next night’s stay at another Holiday Inn several hundred miles away. And you knew that it would be just as nice as the one that you had stayed in the night before. Holiday Inn also boasted that they had no “No Vacancy” signs. If they were booked up, they would help you find another room somewhere else, which was also a pretty radical new idea in customer service.

By the late 70’s, some of the original Holiday Inns had begun showing their age. I remember staying in one in Oklahoma City about 1979 (the year that Wilson retired) that was in pretty poor shape, as far as worn-out carpets, stains, and dated decorating were concerned. The chain could have foundered at that point, but it showed that there was still life left in the name.

The corporate entities that took over from Wilson changed the look of the venerable signs that had long stood outside the motels. They also laid down the law as to the condition of any affiliate that would continue to carry the name. Interestingly, there are a few examples of Holiday Inn’s original signs that had been repainted by the motel’s owners who chose to end the affiliation..

There continue to be about 1,400 Holiday Inns worldwide, and a staggering 1,700 Holiday Inn Expresses. So even though the familiar green signs are gone, the pleasure of staying at a nice, comfortable, clean Holiday Inn is still with us.