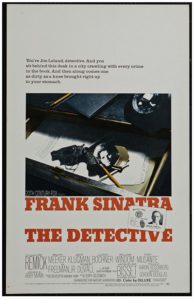 The movies reigned supreme over the entertainment business for a nice run of the 20th century. They knocked live Vaudeville performances out of the saddle, and never looked back. The movie industry didn’t notice when Scotsman John Logie Baird sent a television signal over the wires from London to Glasgow in 1927.

The Golden Age of Hollywood lasted until the late 1950’s. By then, televisions sat in a large percentage of American households’ living rooms, and movie studios were starting to feel the pinch.

So about this time, movies began getting more, shall we say, risque. After all, you had to do SOMETHING to keep the public paying money to go to the cinema.

But that meant conflict with the Hays Code. This list of rules, adopted by the MPAA in 1930, spelled out what was and was not considered morally acceptable in the production of motion pictures for a public audience.

The code was pretty puritan in nature. Check out the Wikipedia entry to get an idea. By the late 1950’s, it was obvious that the direction Hollywood was heading with regards to what movies would depict would soon mean a clash.

The clash came by the MPAA refusing to certify movies, and the studios releasing them anyway. These films included Some Like It Hot (recently voted the funniest movie of all time by the American Film Institute), Psycho, The Man with the Golden Arm, Anatomy of a Murder, and others. Something had to be done, or the MPAA would lose its grip over film making.

In 1966, the MPAA revised the Hays Code. It now allowed for a vague SMA rating, Suggested for Mature Audiences. It pleased nobody, including the filmmakers, or the audiences concerned about adult content being seen when not wanted.

Two movies were released in 1967 with the “F bomb.” They had the same mealy-mouthed SMA rating as did other films that might have contained a single “damn.” Obviously, this system didn’t work.

So in 1968, in large part due to controversy caused by Frank Sinatra’s adult-themed The Detective, a murder mystery that would probably receive an R rating today, the MPAA adopted the ratings system.

You might remember that they were originally G, M, R, and X. Parents were confused by the M rating, many thinking it was more graphic than R, so in 1970 it was replaced by GP (general patronage). In 1972, GP became PG (parental guidance).

Today. we’re used to checking a movie’s ratings. No doubt about it, many movies rated X in the 60’s (e.g. Midnight Cowboy) would barely rate an R today. The times, they are certainly a-changing. And sadly, IMHO, Hollywood seems to have not noticed that some recent G-rated films like The Rookie and The Princess Diaries made big box office bucks.

But if you remember JFK, you remember going to the movies when ratings were something that either didn’t exist, or that nobody paid any attention to.