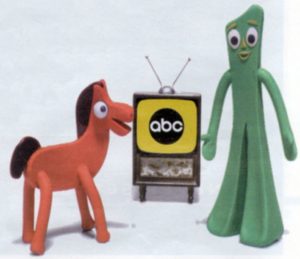 Circa 1968, there probably wasn’t an American Boomer kid alive who hadn’t heard of Gumby and Pokey. However, a surprisingly large percentage of them knew them only as toys. There were over 200 TV episodes of Gumby and Pokey produced, yet their distribution via syndication was not nearly as encompassing as Leave It to Beaver, Sea Hunt, or the Donna Reed Show. Those canceled TV series were familiar afternoon fare for schoolkids all over the nation. But Gumby and Pokey didn’t become widely seen on television until the Nickelodeon Network started showing their episodes in the late 80’s.

Gumby was created by animator Art Clokey. In 1955, he created a claymation answer to Walt Disney’s Fantasia called Gumbasia.

The short was a big hit, and Clokey was invited to create a series that would be featured on Howdy Doody. Gumby made his debut on the show in 1956, Pokey and the pesky blockheads showed up shortly afterward.

They were such a hit that NBC granted the clay characters their own series beginning in 1957. That series lasted a mere single season, but Gumby and friends weren’t done with television.

The show went into syndication, but much less widely distributed as the previously mentioned series. Yet it proved a steady performer, profitable enough that new episodes were added in 1962. A few new episodes would be produced each year until 1967. The syndication continued, but the show was effectively gone by the 70’s.

However, with the debut of Nickelodeon, demand for reasonably priced syndicated series that would appeal to both kids and nostalgic adults brought Gumby and his pals back to the small screen. In fact, new episodes were produced that introduced new characters.

Besides Gumby, Pokey, and the blockheads, there were his parents, Gumbo and Gumba; the yellow dinosaur Prickle; Gumby’s dog Nopey; Goo, the flying mermaid; Minga, Gumby’s sister; Tilly the chicken; and Denali the mastodon. Surreal, fun stuff.

But kids like me, who missed out on the TV series, still had the Gumby and Pokey toys to play with. And play with them we did, even though we knew nothing of their television presence. The toys were cool enough, and responsive enough to a kid’s imagination, that seeing them portrayed on the idiot box was not necessary for a kid to greatly enjoy playing with them.

Clokey, who also handled the much-more-marketed Davey and Goliath, launched the careers of many who would one day be giants in the animation business. Claymation, invented so long ago, continues to be a cutting-edge animation technique.

One last bit of trivia: Gumby’s favorite mode of transportation, gliding around on one foot, was devised by Clokey to keep from painstakingly creating a walking stride, many, many hours of work in the world of claymation. Indeed, the wheeled sneakers commonly seen today on kids’ feet may be a byproduct of an animator’s shortcut.