In the TV theme song hall of fame, if such a thing exists, surely the Most Hallowed section contains the tune that tells the tale of how first mate Gilligan and his skipper (named, as every trivia fan knows, Jonas Grumby) and the rest of the gang found themselves stranded on a desert island.

I seriously doubt that there is a Baby Boomer alive who isn’t familiar with the ditty.

But what you may not have realized about Gilligan’s Island is that it had something in common with Star Trek. Both shows’ popularity didn’t REALLY take off until after they were cancelled after a relatively short first run.

Gilligan and his buddies got shipwrecked on the Saturday night of September 26, 1964. That was when the first episode aired, and the black and white show did very well in the ratings with that particular time slot. After the first year, it began to be broadcast in color, and it was also moved to Thursday nights. The ratings were still quite respectable, never straying from the Top 25, but a strange set of circumstances would doom the show after its third year. More on that in just a bit. 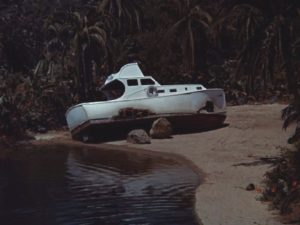 The show was the brainchild of prolific TV screenwriter Sherwood Schwartz. He put together the motley cast of characters who would have their lives irreversibly changed during a pleasant three-hour trip (although Mrs. Howell must have had some premonition of disaster, otherwise why would she pack so many suitcases???). Who would play the part of lovable, bumbling Gilligan?

Well, that was a no-brainer. It would have to be Jerry Van Dyke.

Van Dyke said no, thanks. He saw the show as a potential bomb. The next year, he jumped at the chance to star in My Mother, the Car. Incidentally, he also turned down the role of Barney Fife.

That’s why we love Jerry. He is just as capable of making dumb decisions at the rest of us.

The show’s plotline was painfully predictable. The gang would be within an eyelash of being rescued when Gilligan would goof things up. The skipper would smack him with his hat. Another week stuck on the island, until the next episode. Sigh.

But we kids ate it up. Our fathers and older brothers enjoyed it too, particularly the recurring roles of sultry Ginger and sweet, cute, innocent Mary Ann.

This stirred up an eternal debate: Ginger, or Mary Ann? 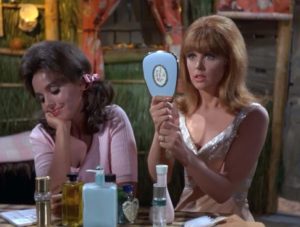 The question was immortalized in a 1993 Budweiser commercial, which was one of the earliest examples of Boomer nostalgia. And yes, I have to strongly agree that Jeannie surpassed them both.

The show came to an untimely end after its third season. Here are the details from its Wikipedia article:

Under pressure from the network president, William S. Paley and his wife Babe, as well as many network affiliates and longtime fans of Gunsmoke (which had been airing late on Saturday nights), to reverse its threatened cancellation, CBS rescheduled the Western to an earlier time slot on Monday evenings. This had been Gilligan’s Island’s timeslot in its third season. (The show ran on Saturdays in its debut season, before moving to Thursdays in season two.) Though Gilligan’s Island’s ratings had slumped from 24.7 (18th) to 22.1 (22nd) out of the top 25 (possibly as the result of two timeslot shifts in two years), the series was still profitable. Nevertheless, it was cancelled at practically the last minute. Some of the cast had bought houses based on Sherwood Schwartz’s news of verbal confirmation that the series would be renewed for a fourth season.

So, the last episode ended just as the other 97 did, still stuck on the island.

Three reunion movies were made, however, bringing closures of sorts to the whole situation.

Today, Gilligan’s Island continues to be a hot syndicated item. Our grandkids are getting as big a kick out of it as we did. And popular opinion seems to continue to favor Mary Ann over Ginger.

But let’s face it. Neither one can touch Jeannie.