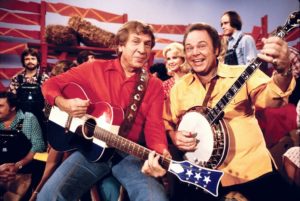 CBS faced a dilemma in 1971. Sure, they were the top-rated network. Sure, they were making untold millions in advertising revenue. But their audience was old enough to remember WWII, many even recalling the hard times of the Great Depression. CBS execs would have preferred a younger demographic. So they did what any clueless bunch of corporate clods would do: they unceremoniously dumped a batch of well-performing shows because their audience was too old.

The victims of what became known as “the rural purge” included The Beverly Hillbillies, Green Acres, Sullivan, and a relative newcomer called Hee-Haw.

Hee-Haw was a variety show that had a distinct country flavor. Hosted by Buck Owens and Roy Clark at the peak of their popularity in 1969, it was kind of like Laugh-In set in a cornfield. It was also a hit.

But, of course, seeing how the target audience wasn’t precisely 24.879 years old, the show had to go. But Hee-Haw‘s producers felt like they had a winner, and offered the intact show to any stations that would like to syndicate it. 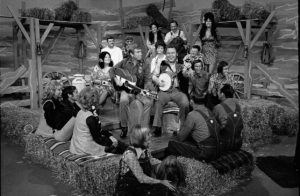 The result was phenomenal. Not only was it grabbed up by stations all over the country (including decidedly non-rural L.A. and New York City), but it remained on the air for another 22 years. Not bad fora show deemed by CBS to be not worth keeping.

Hee-Haw was a montage of acts that became very memorable to its fans. Some people became fans despite themselves, sneering at a corny, countrified variety show until they saw enough episodes to get hooked themselves.

A group that never lost their animosity was the critics as a whole. They didn’t like the clean, simple humor. They didn’t like the the country music, which was years from being popularly embraced itself. And, horror of horrors, the Politically Correct among them decried the perpetuations of stereotypes.

Oh well, we simple, homespun, unsophisticated fans all over the country tuned in anyway. 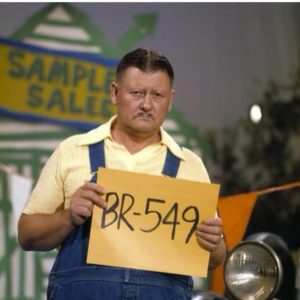 Among the acts that we came to know like a a comfortable old pair of shoes was KORN News (performed by Canadian Don Harron as Charlie Farquharson); Pickin’ and Grinnin’; Gloom, Despair and Agony On Me; The Fence (somebody would tell a bad joke and get smacked in the wazoo by the fence); Hey Grandpa! What’s for supper? (Grandpa Jones would then recite a short poem describing a calorie-loaded Southern dinner); and, of course, my favorite: Samples Sales.

Samples was a former stock car driver who garnered a novelty hit in 1966 at the age of forty by telling a story about a really, really big fish. A local Georgia celebrity, he was added to the cast and his bumbling misdelivery of lines became an audience favorite years before Andy Kauffman.

One I recall was when he asked Buck Owens “How come some women are called amazin’?” Buck’s reply, delivered through unsuccessfully stifled laughter was “That’s because so many of them are named Gracie! You know, (singing) Amazin’ Gracie, how sweet thou art . . .”

Samples was supposed to say “Amazon,” not “amazin’.”

And let’s not forget Stringbean, whose life took a tragic twist. One of his gigs was playing a scarecrow with a cawing crow on his shoulder in the Cornfield segment. After his death, the now silent crow remained as a memorial.

The show probably stayed on too long. Many of the original female leads had to deal with aging issues after twenty years. So did the males, for that matter. Plus, Buck Owens, half of the starring cast, split in 1986. A disastrous attempt to reinvent the show as more appealing to younger audiences was made late in the game. It didn’t go over well, particularly with long-term fans.

But when a Boomer pours himself a good glass of bourbon and puts his feet up and recalls pleasant memories of the past, one of them is surely Hee-Haw, even if he once watched it from a Brooklyn tenement.