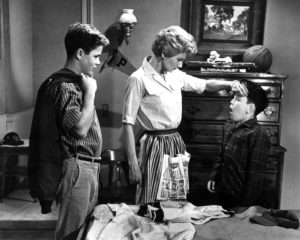 The only good thing about TV
Is shows like ‘Leave it to Beaver’ –Neil Young, “Grandpa’s Interview”

Two different generations of Boomers remember this show two different ways: For the older set, it was a Saturday night offering. For us youngsters, it was on every day after school. But one thing was for sure: we all watched it.

Leave It to Beaver was a simply brilliant, understated sitcom. It used real-life situations and made us laugh at them. And it did so under the constraints of very strict censorship. After all, husbands and wives were given twin beds to sleep in. The thought of them being in the same sack was out of the question.

What do you do under these conditions? You create a great show that depends on excellent writing and acting. 90% of the sitcoms that followed could have learned something from this.

Part of Beaver’s appeal was his genuineness. He was absolutely average. He got average grades, lived in an average home (for the time. Most housewives don’t wear pearls to dust the furniture these days). He was naive, and his buddies were always getting him into trouble. But he always survived and learned something in the process.

The rest of the cast was equally as perfect. Wally had just a little more common sense than Beaver, as older brothers should. But he would get drug into trouble himself periodically, usually at the hands of Eddie Haskell.

We all work with Haskell clones: they berate management and company policy away from the eyes of bosses, and instantly turn into fawning suckups when their superiors walk in. Ward and June were wise to Eddie, but unfortunately, managers tend to fall for the Haskell treatment.

I always got a kick out of the relationship between Lumpy Rutherford and his dad, Fred. Clarence was an underachiever, and no amount of yelling from Fred seemed to have any effect on him. One of my all-time favorite episodes was the one where Beaver and Wally wanted to get back at Lumpy, a bully in the early days. So they laid barrel hoops out in his yard one night (Ward’s idea, surprisingly enough) and began taunting him to come out. Fred and his wife were bewildered at the yelling outside. When Wally hollered “Hey, meathead!” Fred’s wife said “I think they want you, dear.” Of course, Fred trips on the barrel hoops, and Wally and the Beave are in dutch yet again.

The show enjoyed a six-year run, even though it was dropped by CBS after the first season. ABC ran it the rest of the way. As Beaver entered puberty, his deepening voice and loss of childhood cuteness meant it was time for things to come to an end.

My kids grew up watching the reruns, just like I did. The show is just as timeless today as it was in the 60’s