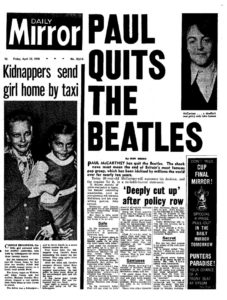 What a wild, crazy, turbulent, jubilant, tragic decade was the 1960’s. It began with lingering communist paranoia and ended with man walking on the moon.

However, nothing symbolized the end of the 60’s quite as effectively as the breakup of the group that we listened to and whose albums and singles we bought by the hundreds of millions.

The 70’s was definitely not going to be the same decade as its predecessor.

The Beatles were one of the most rapidly evolving rock and roll groups to have ever existed. By the time each new album was released, they were already heading a completely new and different direction in the recording studios. Their physical appearance changed as radically as their music, as hair began to grow profusely.

They began as a group, but by 1968, had developed an individually independent sound that resulted in The Beatles, more commonly known as The White Album. Indeed, the double album consists of the first solo projects of the soon-to-be-ex-Beatles. The fact that it stands on its own as a great work is a testament to the sheer immensity of talent of these working-class youths who met up in Liverpool all those years ago.

In late 1969, their last studio album was released: Abbey Road. Interestingly, the quartet had reverted back to a group sound. The traded guitar solos by Paul, George, and John on “The End”, in particular, are some of the finest examples of a group of performers performing as a group.

However, the bonds holding them together were already unraveling. Earlier that year, all agreed to a documentary chronicling the group producing an album. The album and the documentary would be be entitled Get Back, a reference to an attempt by the group to return to the early days when the songs and music flowed freely, with good will among all.

Instead, the movie effectively portrayed four guys who were tired of working together. The original Get Back is disturbing to fans in its depictions of carping, sniping, and all around nastiness three of the Beatles (Not Ringo, God love him) showed towards each other.

Phil Spector, a virtual stranger to the group, produced Get Back (which would eventually become the album Let It Be). However, after the Get Back sessions ended, Abbey Road was produced by old friend George Martin, and the group put their ill will aside for their buddy. The album’s near-perfection is as much a credit to Martin as it is to the Beatles.

In April, 1970, Paul McCartney released a solo album. Fans weren’t too worried, he had done other solo projects. But on the tenth of the same month, a few days after McCartney‘s release, Paul announced that he was through with the group.

Fans (including me) were greatly disturbed by the announcement, but were hopeful that it was just typical artistic crankiness that would pass. But it was all made official on December 31, when a lawsuit was filed by McCartney officially dissolving the Beatles.

Lennon and McCartney in particular traded nasty barbs back and forth, in the press as well as their solo albums. Paul assured his fans that he and Linda would not become a John and Yoko in his liner notes, and Lennon retorted with the song “How Do You Sleep,” a vitriolic shot of venom aimed back at his old friend.

But all of the group loved Ringo. His first solo album, one of my all-time favorites, enlists the help of all three other ex-Beatles. His own song “Early 1970” showed that he had absolutely no ill will towards his friends, and they had none towards him.

And so, the 60’s came to a close. A decade known for students doing something would be followed by the polyester era. Protest music would be replaced by disco. Gas wars would become gas lines.

But still, what a wondrous spectacle it was to witness pop-rock’s greatest group evolve from joyful naivete to cynical surliness, producing truly great music the entire time.