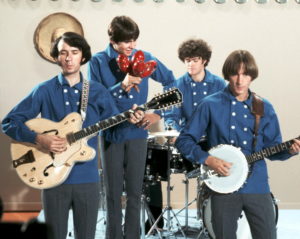 What a concept. Let’s cash in on the Beatles by creating our own group. We’ll run an ad in Daily Variety saying we’re looking for four guys in a struggling pop band. We’ll piece together a group, with a strong emphasis on their acting ability. It’ll make for a hit show and hit records!

Yeah, THAT will work.

Incredibly enough, it did.

The Monkees were born in 1966. Two were musicians (Michael Nesmith and Peter Tork) and two were actors (Mickey Dolenz and Davey Jones).

The show went on the air in September 1966. Within months, they had two number one singles. Or did they?

“Last Train to Clarksville” was revealed to be recorded by a group called Boyce and Hart and the Candystore Prophets. The Monkees’ contribution was overdubbed vocals.

However, the group didn’t wither a la Milli Vanilli. Instead, they rebelled. 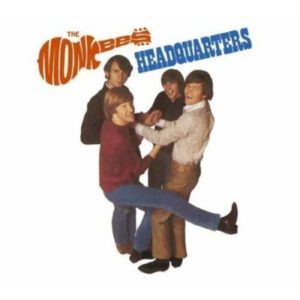 Nesmith was not one to kiss up to anybody. I remember him slamming the Recording Academy when he got a Grammy for producing an R&B album in the late 70’s. He said the very concept of a Rythm and Blues Grammy was racist! Needless to say, he was the most vocal about wanting to be allowed to exercise his own musical talent.

Musical production for the show and albums was handed over to Don Kirshner, a legend of the back end of the music business, producing the albums and shows. While this eliminated the complete musical non-involvement of the group, it didn’t end the stress.

Kirshner hired some writing giants (Goffin and King, Neil Diamond, etc.) to contribute songs. Their next album, More Of The Monkees, was loudly criticized by Nesmith as being not only BAD, but the WORST album ever recorded! It had a grand total of ONE song written by him. Of course, this was before the Sgt. Pepper remake by RSO, so he may have been right about how bad it was.

The group finally released their own product in 1967, Headquarters. It was well received, and was a hit. It was also the group’s acme.

The next album, Pisces, Aquarius, Capricorn & Jones Ltd., featured much outside songwriting like was evident in the early days. This time the group made the decisions, and they didn’t do well.

In 1968, the show ended. A movie was released that same year called Head. It was about the group, and was allegedly very strange. IMDB gives it a 6.2 with a largely polarized audience. I hope to see it someday. It sounds like my kind of flick.

The Monkees should have never ever worked. But somehow, they did. Of course, they didn’t last long. That would have been stretching the odds too thin.