Well, after the commentary on the previous installment of I Remember JFK, the subject of this week’s column was pretty obvious. The public wants Herb Alpert! And what the public wants, it gets, at least this time. 🙂

Herb Alpert was born on March 31, 1935. That makes him a bit too senior to be a Boomer, but he was a strong source of memories for the Boomer generation.

His father was a tailor who emigrated from Russia. His family loved music, and he grew up listening to his father play mandolin, his California-born mother play violin, his sister the piano, and his brother the drums. When Herb was eight, he decided that he wanted to learn the trumpet.

A prodigy he was not. It took Herb years to make the trumpet sound the way he wanted. But he patiently stuck with it, and by the time he was sixteen, he had formed a small band that played weddings, bar mitzvahs, and the like in his L.A. neighborhood.

Not yet convinced that music was his future, he enrolled at USC after high school and joined the gymnastics team. However, he also played with the Trojans’ marching band. In 1955, he was drafted into the army. He was able to grab local musical gigs during evenings to help support his new wife and family.

In 1957, Herb garnered a job as a songwriter for Keen records. He struck up a partnership with Lou Adler, who was also just starting out. Together, they penned some familiar refrains, including What a Wonderful World (with Sam Cooke), Alley Oop for the Hollywood Argyles, and Baby Talk for Jan and Dean. 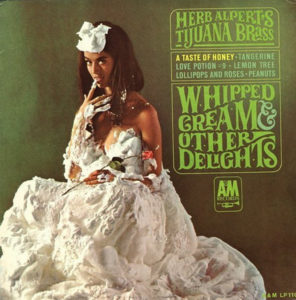 Here’s fodder for you trivia fans: Herb tried his hand at acting, and landed a bit role blowing a shofar in Cecil B. DeMille’s The Ten Commandments. However, he decided that music was a better career move than the silver screen, much to the delight of us Boomers.

It was 1962 that saw him take a quantum leap in the field of music. In his garage/studio, he recorded a tune that featured crowd noise and his own layered horn playing. It was released as The Lonely Bull by The Tijuana Brass featuring Herb Alpert. Not only was the song a Top Twenty hit, but it was actually released by an independent record company that Herb and his pal Jerry Moss had founded. The company was known as Carnival Records, but would soon change its name to A&M.

The public clamored for live appearances, so Alpert hired a team of session musicians. Though the sound was distinctly south of the border, the TJB consisted of Italians, Jews, and one plain old American. Non-Latino comedian Bill Dana also frequently appeared in concerts.

With the luxury of controlling his own releases, Herb Alpert and the Tijuana Brass cranked out hit single after hit single. The group also gained a bit of notoriety with the album cover for Whipped Cream and Other Delights, featuring a beautiful young lady clad in nothing but, yes, whipped cream.

The TJB’s mellow brass tunes punctuated Top Forty lists dominated by the British Invasion, protest music, and Woodstock generation hard rock. Their sound appealed to Boomers, their parents, and their grandparents. This was an amazing accomplishment in an era dominated by a generation gap.

In 1969, Herb felt the need to change a few things in his life. That meant the end of the Tijuana Brass. It also meant a divorce, and marrying the new love in his life, musician Lani Hall. He began concentrating on running A&M Records and finding new talent. And find new talent he did.

During the 70’s, A&M signed and recorded Carpenters, Carole King, Billy Preston, Peter Frampton, Styx, and Supertramp, among many others.

However, the economic upheavals of the 70’s beat up on A&M like it did so many other corporate entities. In 1979, facing serious financial difficulties, its co-founder went back to his trumpet and the recording studio and came up with Rise. Not only did it top the charts, it was adopted as the theme for the 1980 Olympics. A&M would officially survive the 70’s.

The company continued to fly high through the 80’s. In 1987, they sold out to Polygram, with the understanding that Moss and Alpert would still call the shots. They did so until 1993, when they grew tired of dealing with corporate stupidity that has led directly to the RIAA-influenced/infected record business of today. Herb and Jerry bailed in time to watch the whole monstrous mess stagger towards its present day near-extinction.

The duo started another independent label, Almo Sounds, and they continue to find and sign new talent. Their biggest success is Garbage, a band that’s just a bit too new for an old goat like me to dig.

So here’s a hearty tip of the fedora to Herb Alpert: musician extraordinaire and record exec with a conscience. BTW, he and Lani are still together, happily married and touring. Perhaps one day the dying record industry will look at the success of this visionary and change. Nah, I don’t think so.