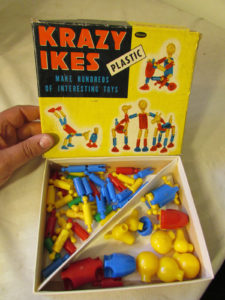 We had lots of toys in the 60’s. Our generation was a goldmine to the likes of Mattel, Hasbro, and the rest of the mega-manufacturers of plastic gewgaws.

Krazy Ikes were a bit more obscure than Tinkertoys, but were along the same vein. They were boxes of plastic parts that could be connected to make your own creations, creatures, in this case. By my time, the parts were made of plastic, but in doing a little research on the toy, I discovered that they were first made by a company called Knapp Electric out of wood, way back in 1930!

They had the coolest funky animal heads, looking more like space aliens than critters. They just had something about them that demanded that a seven-year-old kid pick them up and start making things!

There are lots of Krazy Ike sets available today on eBay and such, but the inexpensive plastic has grown brittle over the years, so be careful if you get a set and succumb to the mysterious draw to start building! That force is still effective forty years later.