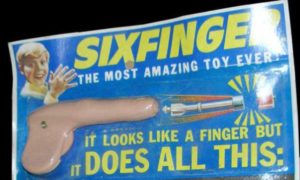 Television was definitely the way to reach a kid circa 1966. Pre-adolescents of the 60’s weren’t so much into radio yet, most of us didn’t read newspapers (except for the comics, of course), and our magazines were comic books. While novelty companies certainly took advantage of the latter to turn us onto things like X-Ray Specs, the bottom line was simple: if you want to sell to millions of kids, advertise on TV and have the item available for sale in the kid’s home town.

That’s why Sixfinger was such a hit. It was advertised profusely on TV, and it was available at places like Woolworth’s, TG&Y, Kress, and many other dime stores and discount houses.

Sixfinger appealed to the same crowd that coveted the 007 Attache Case. And it was much more affordable, so parents could be more easily cajoled into getting you one just to shut up the “warting” (as my dear mom called my ceaseless begging).

The premise behind Sixfinger was simple enough: it looked like an extra digit. And I know what else it looked like, but get your mind out of the gutter! 😉 That extraneous appendage was a hidden source of all sorts of derring-do: a cap-powered bomb launcher, a noisy alert signal, a bullet, a message capsule, another bomb that spread little plastic projectiles (that would inevitably get lost), and, in case all else failed, a ball point pen. That way you could write a desperate note desiring rescue. Oh, I almost forgot, it could also click a Morse code message (after all, all seven-year olds were well schooled in Morse code ;-).

It was pretty neat, and promptly banned from school. So a kid could gain a tremendous measure of coolness by sneaking that extra finger past the teacher. Of course, launching your noisy alert during class might not be the discrete action to take under such circumstances.

The fake fingers were full of all sorts of politically incorrect things that would never be allowed to be sold on the shelves today, so they are collector’s items. But mint-condition Sixfingers still turn up on eBay in their original sealed plastic wrappers for two-figure prices. So if you would like to relive a bit of your past for less than the price of a fine dinner, keep your eyes open. They’re out there.