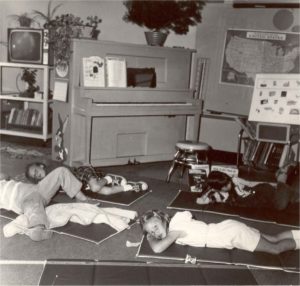 When we were kids, kindergarten was an option, not a requirement. And if our parents opted for it, it cost them cash.

At least that’s the way it was in Oklahoma. That’s how I ended up going to Mrs. Adams’ big yellow rock house every day.

My mom, a schoolteacher, was familiar with Mrs. Adams and her teaching program. She was using something relatively new at the time: phonics. Mom saw the value of learning how to spell, read, and pronounce phonetically. The public schools had not yet committed to the teaching method. But mom had.

I don’t remember too much about kindergarten except for a few things. One was that Mrs. Adams was a fan of cooked cabbage. It wasn’t unusual for the fetid stench of cooked cabbage to foul the air of that big yellow house in the afternoons.

Another thing I remember was naptime.

We would eat lunch (thankfully, she never fed US cooked cabbage!), then spread out our thin cotton mats and crash. At first, a few of us protested, but resistance was futile. Mrs. Adams’ word was law in the big yellow house.

After a while, naptime was welcomed, rather than resisted. And, 42 years later, may I say that it still is.

I don’t know how we slept so well on those flimsy mats on that hard wooden floor. But sleep well we did. Then, we woke up, ready to attack stuff like phonics.

What I remember about that kindergarten class is that practically every one of us learned how to read. We also learned how to recognize tricky combinations of letters like ph = f, sch = sk, etc. We all, with no exceptions that I recall, entered first grade as full-fledged readers.

I remember that it was pretty dramatic in my case. I recall Mrs. Adams going over the basics of phonetic reading, and I picked up the ball and ran. When I got home that day, I was delighted to read out of a Bible story book whose pictures I had always enjoyed, but whose words were, to that point, a mystery. I remember the thrilled look on mom’s face as I read to her out of it.

Of course, this made first grade a tad boring for Mrs. Adams’ graduates. “See Dick, see Jane” just didn’t cut it when you were used to pronouncing words like Jeremiah and Solomon. So, some of us were given more advanced reading material.

There has been a growing movement to cut naptimes from kindergarten. This has caused no little controversy with medical experts who say that 3-5 year old kids need more sleep that older ones. I’m inclined to agree.

The local public school kindergartens also spurn teaching phonics. However, my daughter, who was home-schooled her first two years, did learn it through a tutor that we hired. Like me, she was reading at an advanced level at age five. My son went to conventional kindergarten at the elementary school. He did learn phonics a little later, and caught up quickly.

Some enlightened employers have also seen the benefit of a brief afternoon nap greatly enhancing employee productivity. While I’m happy with my employer of twenty years, I’m sad to say that they aren’t among that group. But I think Mrs. Adams was on to something with those compulsory naps after lunch.

I just wish I could get that smell of cooked cabbage out of my mind.